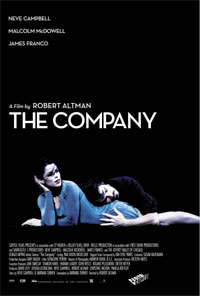 It's Happening So Fast

Synopsis:
This ensemble drama portraits the life of several dancers of a Chicago troupe, focusing on a young dancer who's on the verge of becoming a principal dancer, but finds herself distracted by other interests. Directed by Robert Altman, it features the Joffrey Ballet Company of Chicago and includes many of the dancers as cast members.

My Verdict:
It's all very well to have some wonderful ballet performances in this movie, but a non-existent plot, which lets the film down dreadfully, barely holds them together. Although beautifully filmed, this is an overly long ballet recital that is boring and very tedious at times, the only redeeming feature being the performance by Malcolm McDowell as the Artistic Director, Alberto Antonelli, of the Joffrey Ballet Company in Chicago. He plays an arrogant, self-opinionated and at times, flamboyant eccentric know-it-all that is easy to dislike and is really the only character in the movie with any substance. He is let down by a miserably mediocre cast who look like they are always in rehearsal mode and wish to be elsewhere.

Most of the film is shot showing inside the rehearsal rooms and performances on stage with a few interspersed shots of some of the company away from the company living normal lives. Normal lives not as we know them, but as dancers striving to attract the attention of the decision makers of the company.Neve Campbell, who is an accomplished dancer, is introduced as a lead character, yet nothing substantial really happens to her. We see her at home yet never get to know her. We are shown snippets of her new relationship with a chef that never really leads anywhere. Neve rehearsed 8 hours a day, for 4 months to prepare herself for this role and it shows. She really is a brilliant dancer. This was also her project where for years she wanted to bring to the screen a movie about a ballet company and all the nuances that encompass it.

Overall this is a very disappointing movie that is only really worth seeing if you are a dedicated dance/ballet fan or a Robert Altman fan, otherwise you may well end up bored to tears.