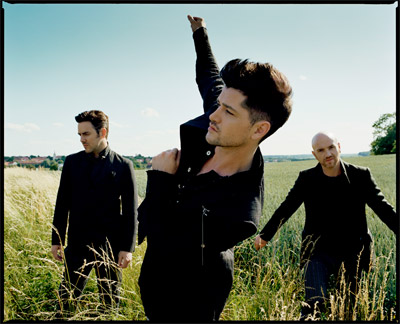 The Script have released the eagerly anticipated new album #3, through Sony Music Entertainment Australia, with killer new single Hall Of Fame feat. will.i.am storming up the airplay charts around the country.

To celebrate their newest release, the Irish trio will be performing a very special show at Sydney's Metro Theatre when they visit Australia later this month. The band will be performing tracks from #3 in addition to the songs that have won hearts across the globe like 'The Man Who Can't Be Moved' and 'Breakeven'. Be quick to get tickets to this one-off performance, The Script's tours are renowned for selling out and this show is sure to be no exception.

Penned by the band, recorded at Sphere Studios in London and produced by Danny and Mark - with fellow Irish producer Jimbo Barry also taking on production duties - it was mixed by Mark 'Spike' Stent (Coldplay, Muse, Oasis, No Doubt).

"There's a synergy to three," says singer Danny O'Donoghue. "If you delve in to it - which we tend to do with everything - it's a lucky number, in the past a religious number."

It's a return to the rhythm propelled, groove laden sound of their self-titled, No.1 charting debut, and an album which, lyrically, they all agree is their best to date. The first single, Hall Of Fame feat. will.i.am - already at a staggering 1.7 million views on YouTube - perfectly encapsulates these life-affirming sentiments.

From Good Ol' Days - a rambunctious romp about living in the moment - to the stunning, strings-led No Words, with its haunting banshee shriek, ballad Six Degrees Of Seaparation is fuelled by raw, untamed emotion and the beautifully fragile You Could See Me Now addresses the death of Mark's parents and of Danny's father with such great poignancy.All in all, it's a meticulously crafted, cast iron album of mixed emotions, but one bursting full of meaning.

The stats don't lie: they've clocked up an impressive 128 million YouTube views, 1.5 million twitter followers and 3.7 million facebook followers. That's not forgetting the two BRIT nominations and sell out arena shows, including the Aviva Stadium in Dublin as well as sold out tours of Australia, a #1 airplay single in Breakeven and 2 platinum albums here in Australia.

Could they be on course for the hat-trick…?