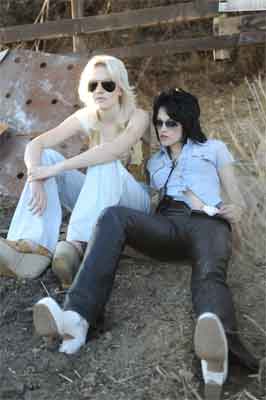 Synopsis: "Girls got balls... They're just a little higher up, that's all...." Joan Jett

Kristen Stewart and Dakota Fanning star as Joan Jett and Cherie Currie in The Runaways, the music-fueled, coming of age story of the groundbreaking, all girl 1970s rock band. Written and directed by Floria Sigismondi.

Los Angeles 1975, Joan Jett (Kristen Stewart) and Cherie Currie (Dakota Fanning), two teenage valley girls with punk in their blood, meet and become the heart and soul of the seminal all girl band, The Runaways.

Floria Sigismondi brings The Runaways to the big screen in this story of a group of extraordinary young women as they rise from rebellious Southern California kids to rock stars of the now legendary band that paved the way for future generations of girl musicians. Under the Svengali-like influence of rock impresario Kim Fowley (Michael Shannon), the group evolves into an outrageous success and a family of misfits. With its tough-chick image and raw talent, the band quickly earns a name for itself-and so do its two leads: Joan is the band's pure rock' n' roll heart, while Cherie, with her Bowie-Bardot looks, is the sex kitten.

Verdict: Welcome to 1975 where the cars are fast, the music's faster and David Bowie is king. Welcome to The Runaways where five teenaged girls are rebel queens.

The film endeavors to explore The Runaways through Cherie's story, which leaves little screen time for the bands additional members; lead guitarist Lita Ford (Scout Taylor-Compton), drummer Sandy West (Stella Maeve) and fictional bassist (the original, Jackie Fox objected to her portrayal in the film) 'Robin'(Alia Shawkat). Despite this, the musical performances were a major highlight; the actors definitely capture the bands edge and enthusiasm, specifically the leads. Cherie's trademark mic moves are amazing to watch and Joan's distinct growl is spot on. These are not the Dakota and Kristen that fans will be used too; their no holds barred performances will leave Twilight in the wake.

Although, not as explicit as Cherie's novel, Floria's interpretation certainly retains the earnest fervor in which The Runaways sought their success, which was undoubtedly aided by Joan Jett's involvement in the film as the executive producer. Audiences will be impressed by the authenticity in which the three lead performances are delivered. Michael Shannon's unbelievably accurate portrayal of Kim Fowley will have viewers cringing and laughing, delivering some of the best lines: 'this is not about women's lib it's about women's libido'. Dakota as 'Cherie' has never been this vulnerable yet wildly unpredictable, her on screen voyage is explosive and incredible. Kristen completely transforms into Joan Jett, mastering the voice, the hair and the attitude of Joan's idol Suzi Quatro. Both Dakota and Kristen give solid performances and embody their characters right down to using their left hands to sign their music contracts.

Floria delivers a film dripping with teen lust, leather and love of sound. Her previous experience via directing music videos proves invaluable. Working with artists such as: The White Strips, Muse, and none other than David Bowie himself mean the true gritty 'rock and roll' sprit of the film is never lost.

Cinematically, the film is both visually and aurally thrilling; it moves though scenes in a kind of kaleidoscopic fashion capturing not only the mood but the depiction of the vintage era perfectly.

Ultimately, the film keeps its explosive momentum throughout as it tracks 'The Runaways' ascent into stardom and the ungraceful fall that ensues. It succeeds in emoting empathy for the bands cinematic journey, for these five girls who just 'wanna be where the boys are'. So prepare yourself for one trip you won't forget, these tunes will stay with you long after the final credits.