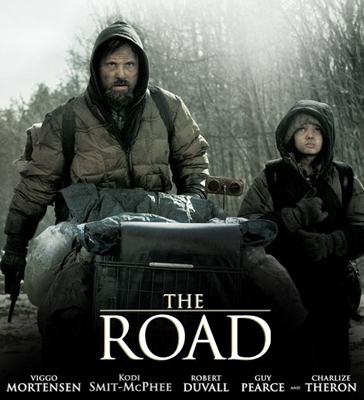 Synopsis: From Cormac McCarthy, author of No Country For Old Men, comes the highly anticipated big screen adaptation of the beloved, best-selling and Pulitzer Prize-winning novel, The Road. Academy Award-nominee Viggo Mortensen leads an all-star cast featuring Charlize Theron, Robert Duvall, Guy Pearce and young newcomer Kodi Smit-McPhee in this epic post-apocalyptic tale of the survival of a father (Mortsensen) and his young son (Smit-McPhee) as they journey across a barren America that was destroyed by a mysterious cataclysm. A masterpiece adventure, The Road boldly imagines a future in which men are pushed to the worst and the best that they are capable of-a future in which a father and his son are sustained by love.

It is more than ten years since the world was destroyed-by what, nobody can say. It could have been a nuclear event, or the collision of the Earth with another cosmic entity. Or the sun may have imploded and taken out the planet as collateral damage to its own flameout. One day there was a big flash of light, and then nothing. The result of this cataclysmic event, whatever it was, is that there is no energy, no power, no vegetation, no food. Millions of people have been eradicated, destroyed by fires and floods or scorched and incinerated in their cars where they sat when the event hit or suffocated by starvation and despair in civilisation's slow death after the power went out.

The Man (Viggo Mortensen) and The Boy (Kodi Smit-McPhee) - "each the other's world entire," as McCarthy describes them in his novel - are on the move with all their precious possessions-whatever food and clothing they can scrounge, utensils and tools, plastic bags, tarps, blankets and anything else to keep warm in the frigid, sunless, ash-filled outdoors-on their backs and in a shopping cart outfitted with a bicycle mirror so they can see who's coming up behind them. Their desperate, improvised traveling gear and their scruffy unwashed bodies give them the look of the homeless. And that is what they are. That's what everybody is in this lifeless frontier.

As they trudge along on foot, following the once-magnificent American highway system west toward the ocean, they hide in the woods and in old abandoned structures, any shelter they can improvise that keeps them safe from the elements and the wandering bands who would think nothing of taking everything from them. They come across all sorts of desperate people. There is a road gang, a bunch of tough hombres who have somehow managed to fuel their big semi. There are scavengers and hunters of anything that moves, some well-fed cannibals who keep a cellar-full of barely human cuisine in a big house on a hill. And there are all manner of thieves.

And then there is an Old Man (Robert Duvall), who they come across bent and shuffling down the road in front of them, walking with a makeshift cane in shoes made of rags and cardboard. The Boy takes a liking to him and persuades his dad to share some of their food and camp with him. The old man, who admits his name is Ely, is equally impressed by the boy-impressed at his very existence as they are by his. He tells them that he's been on the road forever. He tells them that when he saw the boy he thought he'd died and gone to heaven, seen an angel.

Even in this bleak universe, there are moments of happiness. Occasionally, the pair comes across some food long forgotten in a cupboard or stashed in a fallout shelter. While rummaging in an abandoned mall, the father finds a forgotten can of Coke stuck in the bowels of an upturned vending machine. When he gives the treat to his son, who has never indulged in anything like it, the father is amused by his son's astonishment of the drink's fizzy sweetness. And when they come across a waterfall with relatively clean water; both jump right in for a session of skinny-dipping.

And then there are the numerous flashbacks to the man's life with his wife (Charlize Theron) before the great disaster, before she took her own life rather than see it taken by what or who she knew was coming. The man clings to these memories that nourish him spiritually and help him to push his increasingly frail body ever further in the quest to get his son to some kind of safety. The sweet memory of his life before the fall, and of his halcyon childhood days are some of the bright spots that enliven the terrain for him and the boy.

The child's innate goodness, his compassion and his sense of wonder and curiosity are also bright spots in this story, reminding the man of why he must keep on going no matter what even when he has forgotten why he must do it.

The Road is an adventure story, a horror story, a road movie and ultimately a love story between a father and his son, between a man and his wife, as it is a celebration of the inextinguishable will to live. It is a thrilling evocation of human endurance and an unflinching examination of people at their worst-and at their best.

For every mother, every father who's ever had a child, for every son of a father, The Road will be a journey into the human spirit. It is a survivor's story in which the heroes carry the fire that is the life force that keeps hope alive no matter what.