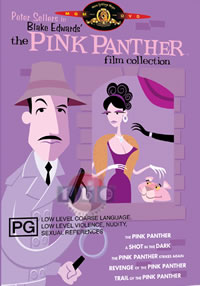 Synopsis:
The story centres on a familiar murder-heist narrative. A famous soccer coach meets an untimely death by homicide (via poisoned dart), leaving behind Xania, his beautiful and famous fiancée (pop star Beyonce Knowles), who is devastated. Not only has Xania lost her intended, but she also finds that her engagement ring--the fabled "pink panther" diamond--is missing. Inspector Clouseau's boss, Inspector Dreyfus (a topnotch Kevin Kline), decides to give the case to his incompetent inferior, scheming to take over the case at just the right moment in order to win the coveted Medal of Honor. With his reverent sidekick Ponton (Jean Reno) and adoring secretary Nicole (Emily Mortimer), Clouseau tackles the case as only he can, destroying evidence, fumbling names and pronunciations, insulting victims, and all the while attempting to charm the gorgeous Xania in his inimitably uproarious style.

My Verdict:
After a famous soccer coach is murdered on the field and his ring the famous Pink Panther diamond is stolen right then and there leaving his fiancé Xania (Beyonce Knowles) distressed, Inspector Clouseau (Steve Martin) is brought in to solve the case by his boss, Inspector Dreyfus (Kevin Kline) who hopes the bumbling and inept Clouseau will mess up enough so that he can take over, solve the case and take the glory. But what Dreyfus doesn't realise is that Clouseau's incompetence will win through and that Clouseau will be the winner and France's next hero.

Using a well-used formula of slapstick and visual humour to carry the movie, director Shawn Levy tries desperately to bring back the class that surrounded Peter Sellers in his role as Inspector Clouseau in 1963 and to introduce the character to a new audience.

Steve Martin uses a quasi-French accent as the naïve, inept and sometimes-stupid Clouseau, which is in stark contrast to most recent movie, 2005's 'Shopgirl' that was such a seriously beautiful piece. Here, Martin relies on the script and not himself, which is a shame as his talent is wasted.

Alongside Martin is Jean Reno as the deadpan sidekick Ponton who spends most of his time trying to look innocent and poker-faced. Kevin Kline seems to be going through the motions as Dreyfus and things get really desperate and embarrassing when the classy Clive Owen is brought in to try to justify a serious status. Beyonce Knowles is the femme fatale who gets around just trying to get noticed and she even gets to sing.

Whilst this 2006 version of 'The Pink Panther' is never intended to be a re-make it is hard not to make comparisons with the original and it is quite different in storyline to the original, but it does beg the question whether Steve Martin can cut it as Inspector Clouseau. So does he? Yes to a degree but he will never be Peter Sellers, he is simply Steve Martin doing his version of Inspector Clouseau and some scenes are even funny but too often the humour falls flat with its overt obviousness and nakedness.

Think also that there is a generation that do not even know of the Peter Sellers Clouseau so they will probably always believe that Martin is the one and only, but for others, Sellers is and always will be the only Clouseau. Perhaps some movie franchises should just be left alone with their originality and uniqueness left intact.