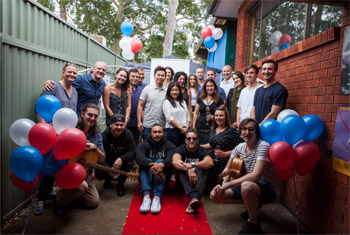 The world united through the power of music on Saturday, as The Official Top Ten Night hosted its Top Ten Music 13 event, in aid of Suicide Prevention Australia. With 10 events held across six different countries in the space of 24 hours, over two hundred music lovers enjoyed the intimate Top Ten Music 13 events, which sparked conversations about mental health, with the aim of reducing the stigma of talking about suicide, and its prevention.

Several superstars were involved in Top Ten Music 13, which saw guests select and listen to their top music tracks of all time, while engaging in open conversations about suicide and its prevention. Renowned English comedian Stephen Fry, festival favourite DJ Tigerlilly, model and TV personality Kris Smith and acclaimed actress Danielle Cormack, supported as -Absent Friends' by recording special video messages about their favourite song of all time, which was then played at the event for supporters to enjoy. You can view their submissions here.

Top Ten Music 13 is a part of The Official Top Ten Night - a series of unique events held simultaneously around the world with a simple message: make a list, make a difference. Established by Alastair Taylor, the intimate Top Ten Music and Top Ten Movie events began as a fun night in between friends, but are now making a serious difference in suicide prevention, by instigating much needed conversations about suicide and its prevention at events all over the world.

Proud co-founder of The Official Top Ten Night events, Alastair Taylor is excited by the growth of this year's event.

'Each year the event gets bigger and bigger, and our ultimate goal is to have an Official Top Ten Night taking place in every major city in the world, shining an even greater light on the important issue of mental health," Taylor said.

Everyone can get involved in The Official Top Ten Night by attending, supporting or organising an event, becoming an Absent Friend, Music Match or donating to Suicide Prevention Australia. For more information, to get involved or to donate, visit www.officialtoptennight.com, or join the conversation on Facebook, Twitter, Instagram or YouTube.