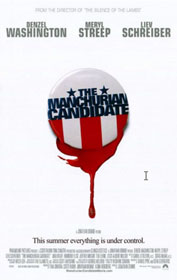 Everything Is Under Control

Synopsis:
Academy Award® winners Denzel Washington and Meryl Streep, along withGolden Globe and Emmy nominee Liev Schreiber, mesmerize a whole newgeneration of audiences in Academy Award® winner Jonathan Demme's "TheManchurian Candidate." As the entire nation watches the presidentialcampaign hurtle towards Election Day, one soldier races to uncover theconspiracy behind it - a conspiracy that seeks to destroy democracy itself.U.S. Army Major Bennett Marco (Washington) can't sleep at night … and hedoesn't want to. Marco spends his days giving inspiring speeches about hisplatoon's ambush in the Kuwaiti desert and the heroics of Sergeant RaymondShaw (Schreiber), who won the Medal of Honour for saving Marco's crew. Butat night, Marco's dreamlike memories of the desert turn sinister andterrifying. And Marco privately wonders whether the two soldiers who diedin the fire-fight might have met darker fates than officially recorded - andwhether Shaw might not be the glorious hero that everyone thinks he is.When Shaw takes the national stage as a sure-fire candidate for vicepresident - under the thumb of his controversial mother, Senator EleanorPrentiss Shaw (Streep) - Marco is forced to act on his growing suspicions.With military officials questioning his sanity, and the net of securitytightening around Shaw, Marco races to probe deeper into the unimaginable,shocking truth before the White House is won.

My Verdict:
'The Manchurian Candidate' is based upon Richard Condon's best-selling novel and is a re-make of the 1962 movie of the same name directed by John Frankenheimer. Denzel Washington gives a flawless performance as he takes on the lead role as the tormented Army Major Ben Marco. In yet another dramatic role that proves Washington is one of the finest, he plays the role that was initially created by Frank Sinatra but gives it his own interpretation, not even watching the original movie so that he could create his own Ben Marco.

In this updated version, Marco is a troubled man when he realises that the ambush where he was involved in Kuwait, 1991, doesn't coincide with what he sees in his dreams. On his speech circuit he is approached by one of the other members of the squad who tells him of his nightmares, them being similar to Marco's. His suspicions are further alerted when Sergeant Raymond Shaw (Live Schreiber doing a great job as a puppet) is nominated to run for Vice President. Marco sets out to find the truth and whether his memory of the Kuwait ambush is correct or if something else happened, which is what he finds himself now believing happened.

Meryl Streep plays Shaw's mother, Senator Eleanor Prentiss Shaw (Ellie) who manages to steal all her scenes and looks every bit the part of a senator, even being so good that at times she was down right spooky. Jon Voigt rounds off the lead characters with a fine performance as Vice President elect, Senator Thomas Jordan.

At times 'The Manchurian Candidate' is hard to follow, but this eases as the movie progresses and as often with political thrillers there are so many sinister characters and red herrings that it is hard to recognise who are the "goodies" and who are the "baddies" until quite late in the story. 'The Manchurian Candidate' is an excellent thriller that combines some excellent performances with an intriguing story that will leave you guessing right to the end.