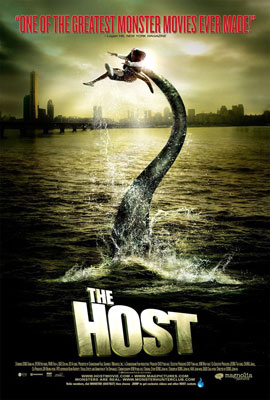 Cast: Song Kang-ho, Byun Hee-bong, Ko A-sung, Bae Du-na, Park Hae-il
Director: Bong Joon-ho
Screenplay: Baek Chul-hyun, Bong Joon-ho, Ha Won-jun
Genre: Action/ horror/ comedy
Rated: M
Running Time: 112 minutes
Synopsis:
Park Gang-du (Song Kang-ho) is a bit of a no hoper. He works in a fast food kiosk on the banks of Seouls Han River along side his long-suffering father (Byun Hee-bong), who ends up doing most of the work. The only thing Gang-du really has going for him is his clever daughter, Hyun-seo (Ko A-sung), but even she cant quite respect him. Meanwhile Gang-dus sister, Nam Ju (Bae Du-na), is messing up her shot at sporting glory with nerves, while younger brother, Nam-il (Park Hae-il) is an unemployed wannabe radical. The familys world is changed forever when a gigantic mutant creature - the result of toxic dumping by the US military - emerges from the river to terrorize the populace, and makes off with Hyun-seo. Devastated, Gang-du and the others spring into action, resolving that if the beloved child is alive they will find her at any cost. Meanwhile the government announces that the creature is Host to a deadly new virus. As panic spreads and bureaucracy kicks into high gear, it seems the Parks can rely only on each other.

My verdict:
'The Host' was box office gold in South Korea and why not? Its fun and suspenseful and features a giant amphibian thing that eats people. This is the sort of film Hollywood should make but doesnt; an intelligent genre film that doesnt take itself too seriously. Its protagonists are the members of a flawed, slightly dopey family and about as far from the Tom Cruise/Will Smith brand of hero as you can get. Scares are deftly combined with laughs, skewed slightly in favour of comedy. While the Host is a frightening creation - and its always especially unpleasant to see a child in danger - theres something oddly hilarious about many of the difficulties these characters face... like their absurdly ill-fated attempts to get anyone to listen to a single thing they say.

All the performances here are great - Bae Du-na as an eccentric archery champion was my particular favourite - and the off-beat Korean sense of humour strongly in evidence. What differentiates The Host is the parallel to be drawn between the Park familys situation and the plight of the Korean people in recent history. The edge of satire here is sometimes sharp indeed - and on an entirely different plane from the sort of global warming is bad subtext considered oh so daring and liberal by American blockbuster-makers. An indictment of power hungry governments, The Host, like another recent horror hybrid, Pans Labyrinth, examines the cost of political maneuvering to civilians. This is a story about ordinary people dealing with terrible circumstances - abandoned by authorities, ill-equipped for heroism and having to make it up as they go along. The Host is a popcorn movie that resonates with unexpected power.