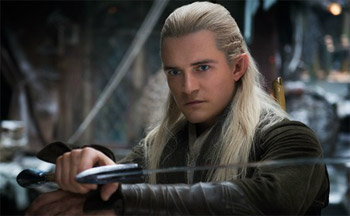 Gearing up for the December 13, 2013, release of 'The Hobbit: The Desolation of Smaug" (December 26, 2013 in Australia), a production of New Line Cinema and Metro-Goldwyn-Mayer Pictures (MGM), fans will get a chance to meet new cast members joining the highly anticipated second film in 'The Hobbit" Trilogy, including Orlando Bloom, Evangeline Lilly, Lee Pace and Luke Evans, as part of a global fan celebration to be held on Monday, November 4 at 5:00pm EST (Tuesday, November 5, at 9:00am AEDST), and simultaneous times around the world. At each of the satellite-linked cinemas in four host cities"Los Angeles, New York, London and Wellington"Jackson and members of his cast and filmmaking team will gather with fans to show exclusive footage from 'The Hobbit: The Desolation of Smaug" and answer questions in front of a live audience, as well as offer a few surprises.

CNN Anchor Anderson Cooper, who serves as special host for the entire event, will be based in New York, where he will welcome Richard Armitage, the film's Thorin Oakenshield, and Orlando Bloom, who returns to the role of Legolas from 'The Lord of the Rings" Trilogy. Evangeline Lilly, who joins the cast as a new Elf warrior, Tauriel, will be based in Los Angeles. London will host new cast member Lee Pace, the film's Elf King Thranduil; Luke Evans, who joins the cast as Bard the Bowman; and Andy Serkis, a member of Jackson's filmmaking team and the first film's Gollum. Peter Jackson will join the celebration from Wellington, New Zealand (where it will be Tuesday, November 5, at 11:00am).

Each cinema will be connected by satellite, allowing audiences to participate in a simultaneous Q&A among participants in all four host locations. Additionally, in cities across the globe"including Brussels, Belgium; Hamburg, Germany; Madrid, Spain; Mexico City, Mexico; Miami, Florida, USA; Paris, France; Rome, Italy; Sydney, Australia, and Toronto, Canada"fans will be invited to gather at select cinemas to be among the first to see the extended footage debut and watch the festivities unfold live. The event will also be streamed live online so that anyone with an internet connection can join the celebration at home or at viewing parties among friends, though the online simulcast will feature an edited version of the extended footage debut.
Details on the simultaneous events can be found at the film's official site (TheHobbit.com) and on Facebook (facebook.com/TheHobbitMovie) and Twitter (Twitter.com/TheHobbitMovie), under the global hashtag #hobbitfanevent.

Details on how to sign up for a chance to join the Sydney event can be found at the Roadshow Films official Facebook page (facebook.com/RoadshowFilms).

From Academy Award®-winning filmmaker Peter Jackson comes 'The Hobbit: The Desolation of Smaug," the second in a trilogy of films adapting the enduringly popular masterpiece The Hobbit, by J.R.R. Tolkien. The three films tell a continuous story set in Middle-earth 60 years before 'The Lord of the Rings," which Jackson and his filmmaking team brought to the big screen in the blockbuster trilogy that culminated with the Oscar®-winning 'The Lord of the Rings: The Return of the King."

The screenplay for 'The Hobbit: The Desolation of Smaug" is by Fran Walsh & Philippa Boyens & Peter Jackson & Guillermo del Toro based on the novel by J.R.R. Tolkien. Jackson also produced the film, together with Carolynne Cunningham, Zane Weiner and Fran Walsh. The executive producers are Alan Horn, Toby Emmerich, Ken Kamins and Carolyn Blackwood, with Philippa Boyens and Eileen Moran serving as co-producers.

The creative behind-the-scenes team is led by director of photography Andrew Lesnie, production designer Dan Hennah, conceptual designers Alan Lee and John Howe, editor Jabez Olssen, and hair and makeup designer Peter Swords King. The costumes are designed by Bob Buck, Ann Maskrey and Richard Taylor. Taylor is also overseeing the design and production of armour, weapons, creatures and special makeup, which are once again being made by the award-winning Weta Workshop. Weta Digital is taking on the visual effects for the film, led by senior visual effects supervisor Joe Letteri. The visual effects supervisor is Eric Saindon, with David Clayton and Eric Reynolds serving as animation supervisors.

Under Jackson's direction, 'The Hobbit: The Desolation of Smaug" was shot in 3D 48 frames-per-second and will be released in High Frame Rate 3D (HFR 3D) in select theaters, other 2D and 3D formats, and IMAX®. Production took place at Jackson's own facilities in Miramar, Wellington, and on location around New Zealand. Post production took place at Park Road Post Production in Wellington.

'The Hobbit: The Desolation of Smaug" will be released in Australian cinemas on Boxing Day, December 26, 2013.
www.hobbitmovies.com.au