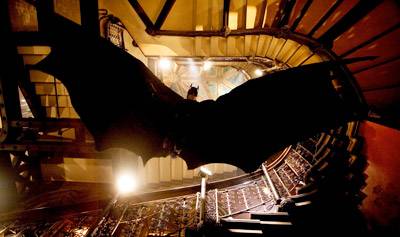 Behind the scenes, "The Dark Knight Rises" reunites the director with several of his longtime collaborators, all of whom worked together on the "The Dark Knight." The creative team includes director of photography Wally Pfister, who recently won an Oscar® for his work on Nolan's 'Inception'; production designer Nathan Crowley; editor Lee Smith; and Oscar®-winning costume designer Lindy Hemming ("Topsy-Turvy"). In addition, Paul Franklin and Chris Corbould, who both won Oscars® for the effects in "Inception," supervised the visual and special effects, respectively. The music is composed by Oscar® winner Hans Zimmer ("The Lion King").

Verdict: The Dark Knight Rises concludes the trilogy with an explosive and spectacular film that is able to hold attention with major twists and turns for the whole 164 minutes and as the credits rise all audiences will want to see the film again, immediately.

Eight years have passed since the torturous events of The Dark Knight and Batman hasn't been seen since the Joker was captured and Harvey Dent was killed (which Batman is still taking the blame for). The Dark Knight Rises revisits and completes the story of characters from the previous two films as well as introducing new characters such as Bane (Tom Hardy), Selina Kyle/Catwoman (Anne Hathaway) and Blake (Joseph Gordon-Levitt). 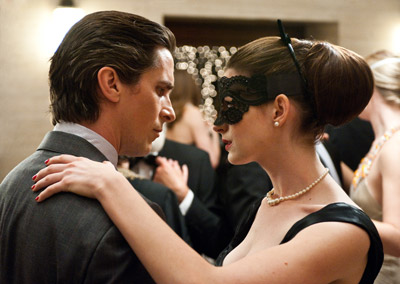 The sexy, alluring and thieving Catwoman is introduced in dramatic disguise and continues to surprise as the film progresses. Anne Hathaway nails the charismatic character and her original encounter with Bruce Wayne encourages him to leave the house for the first time in eight years after the death of his true love, Rachel.

The mature, Joseph Gordon-Levitt provides a phenomenal performance as Blake a young police officer who is compassionate and loyal to the Dark Knight; his performance carries the film, forward.

The merciless Bane's nightmare-inducing voice will haunt you long after the film has finished as his mysterious character and hidden past provokes his lethal actions on Gotham which causes city-wide trauma against everything Bruce Wayne and Batman have worked for.

The Dark Knight Rises is completely unpredictable and thoroughly entertaining whilst being visually magical. The most disappointing part is that Christopher Nolan has apparently finished his epic reinvention of Batman with this final film, whilst I'm ready for more.
Rating: ******