The Blue Hotel Let You Down Interview Emerging Melbourne-based outfit The Blue Hotel release Let You Down, the followup to Silence, the single from earlier this year that firmly established the band's eclectic contemporary pop style. The trio of Jenna Roubos (vocal/piano/synths), Nathan Thomas (guitar/vocal/synths) and Benjamin O'Brien (drums/beats/percussion) have once again created an evocative blend of late-night club grooves and emotional intensity, all reinforced by an ethereal melodic sensibility and refined performances. After a series of successful releases, including the band's debut EP Stand in Gold, The Blue Hotel has gone from strength to strength, affirming their position with more singles and the 2019 EP Into the Firelight.

As the band says about Let You Down, 'It was written during the second long Melbourne lockdown and was just stream of conscious writing which seems to reflect the temper of the times. I guess a feeling of loss and uncertainty and searching for something more than what is being offered. On top of that, there is a truth to not wanting to let the ones you love down. It is a song of hope.'

Amid the atmospheric and lush backdrop of sound, the surging cadences and evolving prism of allure, this optimism is revealed"exhilarative and affecting, a notable incarnation of progressive indie-pop at its very best.

Interview with The Blue Hotel


Question: Can you tell us about Let You Down?

The Blue Hotel: The song was written by Nathan and then Jenna made additional melodic and lyrical changes. Everyone became involved in the production to give it the feel and rush of energy the song needed.

It was written during the 2nd long Melbourne lockdown and was just stream of consciousness writing which seems to reflect the temper of the times.

The Blue Hotel: I guess a feeling of loss and uncertainty and searching for something more than what is being offered. On top of that there is a truth to not wanting to let the ones you love down. It is a song of hope. 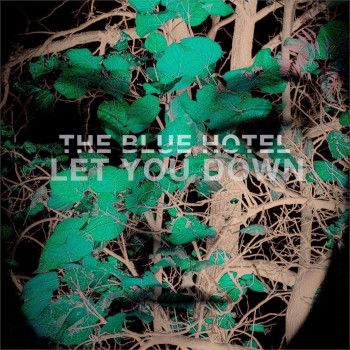 The Blue Hotel: Yes we love performing live very much. We like to put a live stamp and approach on the songs live. It tends to be a little heavier and more scope for improvisation.

We love the final product of recording though getting there can be torturous sometimes as we all having different lines of perfection. The combination works well though and we tend to push each other.

The Blue Hotel: The name was inspired from a Go- Between's song off Oceans Apart. They reference a "black hotel" and also liked that it wasn't associated with a specific "genre reference"

The Blue Hotel: We met online through different projects.

The Blue Hotel: The usual really, just being excited by music as a young teen and dreaming of a different space in the world than what was being offered at school.

The Blue Hotel: More likely a producer would be interesting for us, maybe someone like Damon Albarn someone that would push us out of our comfort zone or writing with an experienced artist like Stevie Nicks or the guys from A-ha.

The Blue Hotel: Being able to express yourself in a completely unique way.

The Blue Hotel: Coffee, emails, social media, writing, recording or editing or an interview. There seems to always be something to do in this band.

The Blue Hotel: We are currently sifting through and demoing songs for a full album, prior to that we will be releasing a new single which has already been mixed and mastered.