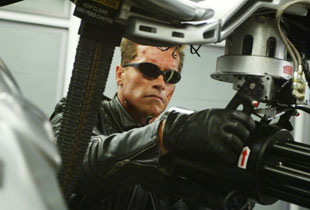 Machines to descend upon the 2003 Cannes International Film Festival.

On Saturday, May 17, the heart of the Cannes International Film Festival, will endure an assault from the future when Arnold Schwarzenegger unveils the newest model of cyborgs set to feature in the latest instalment of the enduring blockbuster series, Terminator.

Mr Schwarzenegger will reveal creative director, Stan Winston's magnificent futuristic robots, the T-1's on Saturday, May 17 at 1.00pm at the legendary Carlton Hotel. That evening, he will be joined by his co-stars Nick Stahl (In the Bedroom, The Thin Red Line), Claire Danes (William Shakespeare's Romeo + Juliet) and Kristanna Loken (Panic) as the Terminator 3/ MTV Party kicks off and ramps up to celebrate the pending international July release of Terminator 3: Rise of the Machines.

Twelve years have passed since T2: Judgement Day and in 2003, The Day of Reckoning has arrived. Now 25, our hero, John Connor has created an untraceable existence for himself living "off the grid" - no home, no credit cards, no cell phone, no job and no way he can be traced by Skynet. Until…out of the shadows of the future steps the Terminatrix or the T-X (KRISTANNA LOKEN): the most sophisticated and fiercest of Skynet's cyborg machines has been sent back through time to annihilate humankind starting with the future's revolutionary leader, John Connor (Nick Stahl).


Judgement Day has arrived.
Terminator 3: Rise of the Machines