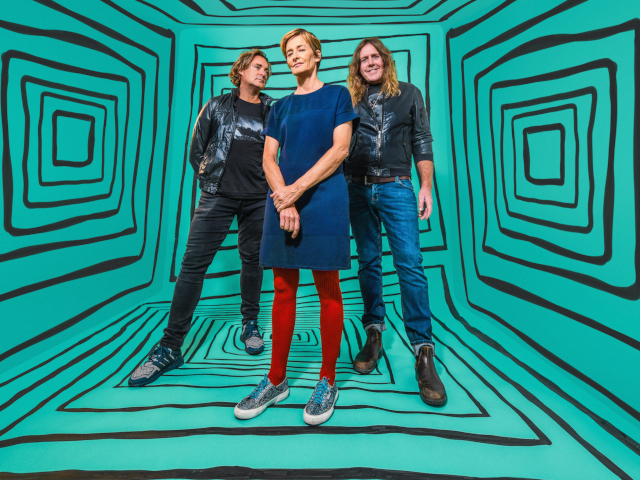 Iconic Aussie band Spiderbait have announced their national Tour In The Key of J, a run of unique and special shows dedicated entirely to celebrating the legacy of their revolutionary bass player Janet English, in support of their new album, Sounds in The Key of J, alongside the official video for new single in nine years, My Car's A UFO.

Their first headline tour since their sellout Ivy & The Big Apples tour in 2017, this distinctive set of shows will kick off in Tasmania at Albert Hall (Launceston) on June 3, before moving through Hobart, Sydney, Melbourne, Brisbane, Fremantle and finishing up in Adelaide at Hindley St Music Hall on August 20. The band will also be appearing at Groovin The Moo Maitland, Canberra and Bendigo in April, and Valleyways Festival in Camden NSW in September.

"Janet's songs are special. And over the past 30 years she's written so many beautiful ones, but also others that hit you like a lighting bolt. The Key of J Tour will be a unique show - like nothing we've done before – it'll be us celebrating Janet's work in Spiderbait, and also the release of the double album collection of her songs Sounds in the Key of J," explains Kram. "We can't wait for this tour to start and to perform so many of her songs live - for me personally, it'll be very moving, and to quote Janet directly… fucken awesome!"

"Kram was going on about the compilation idea – and initially, I said 'hell no'. I kinda said 'OK' to shut him up… And here we are!" jokes Janet. "It's been a tough few years and music really got me through the lockdowns. I still can't quite believe we'll be out touring again soon and for The Key of J tour, I'm super humbled and slightly terrified. I've missed that energy and that connection live music makes, being part of that exchange is one of the most amazing privileges."

"So happy to have a tour coming up with my two best friends, especially to celebrate the Janet dynamic of our band," adds Whitt.

The story of Spiderbait is an unlikely but heartwarming one – three friends from a small Australian country town taking on the music scene, and emerging triumphantly 30 years later, friendship intact, and now one of the biggest and best rock bands on the national landscape. Taking inspiration from far-reaching influences from all sides of the musical spectrum (everything from Slayer to The Bangles), Spiderbait took their fervent thrash-pop from their tiny hometown of Finley in NSW down to Melbourne and immersed themselves in the rich, fertile creative scene. From there they quickly consolidated their status as national treasures, with their popularity spanning three decades with no signs of abating. Spiderbait have released seven acclaimed albums, which have all racked up gold, platinum or double platinum status and have combined Australian sales of over one million units and over 500 million global streams. They have also secured pretty much every accolade there is to achieve on the Australian scene, having taken home numerous ARIA Awards, chalked up a number one single with their cover of Leadbelly's Black Betty in 2004, and were the first Australian act to top the prestigious triple j Hottest 100 with Buy Me A Pony in 1996.

Spiderbait is Janet English on bass, Kram on drums and lead vocals, and Whitt on guitar.

Spiderbait: It's a bit all over the place; pop, punk, country, heavy rock, folk. I love all kinds of music. But mostly we're known for making a cross between pop & punk & rock.


Question: Can you tell us about Sounds in The Key of J?

Spiderbait: It was an idea Kram, our drummer, had to compile all the songs I sang on one record. I wasn't keen to do it but he keep pestering me and I eventually said OK. I'm not that excited about being the centre of attention but it's been great to hear all these songs from the last few decades. They all have such meaning for me; about what I was thinking when they were written, how we recorded them, and so on. It's like looking back through a diary or photo album.

Spiderbait: I'd like them to pick up an instrument or a notebook and start writing about things that they're feeling or that they're experiencing or things that are pissing them off. It's fantastic therapy. Making music is one of the great joys of life.

Spiderbait: We're still workshopping it. It's pretty interesting trying to go back and learn songs from years ago. I had to google some of my lyrics.


Question: What is the story behind Spiderbait?

Spiderbait: We were friends who grew up in a small farming town in rural NSW. When we moved to the city we started going to see local bands. The scene in the 90's Melbourne punk scene was super inspiring and inclusive. Everyone we knew was playing music in their lounge rooms and it just grew and grew from there.

Spiderbait: Just from watching friends and saying we can do that too! It started as a fun thing we did as friends on the weekend. I never expected it to become so big.


Question: After 30 years, what do you think has been the key to keeping the genre and music of Spiderbait alive and kicking?

Spiderbait: Firstly starting a band based on friendship was crucial, it's like family. Secondly keeping the music we write interesting and not being afraid to try different genres and styles of music. I'd be bored writing the same thing over and over. Having three people with different ideas, influences and talents makes for a collaborative space to explore all kinds of music making. Also, sharing our song royalties so everyone's contribution is recognised. We definitely grew from that punk ethic of DIY and inclusion.

Spiderbait: Tough question! Maybe Kim Deal but I'd be too nervous and in awe I think.

Spiderbait: I feel humbled and grateful. It's weird too.

Spiderbait: I remember when we played at the big day out in front of huge crowds. It just seemed like such a strange journey to have come from playing in my Dad's machinery shed on the farm to a few cows.

Spiderbait: Touring can be great fun as well as tough. We did this tour of the USA and Canada that went for months and I was so homesick. I like my routine!

Spiderbait: I like to sit down when I can and play piano or guitar and tinker. When I'm not doing that I'll get on my bike and go for a ride. And dark chocolate will also be consumed at some point of the day.

Spiderbait: I'll keep making music and enjoying that creative outlet. I'm not sure in what form or context but it will always be part of my life. I might do some more study after finishing my psychology degree, who knows?