Son Of The Mask 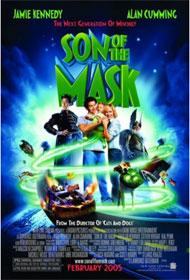 The Next Generation Of Mischief

Synopsis:
A decade after the legendary Mask of Loki wreaked havoc on the life of an unsuspecting adult, the magical mask finds its way into the possession of a child in the family comedy 'Son Of The Mask'. When cartoonist Tim Avery's (Jamie Kennedy) new son is born with the Mask's spectacular powers - to the dismay of the family's jealous dog - it turns the household upside down and launches a kid versus canine battle for control of the Mask. But unbeknownst to them all, Loki has come looking for his mask and it willing to do whatever it takes to get it back.

My Verdict:
Tim Avery (Jamie Kennedy) is a budding cartoonist whose 'son' happens to be his cute beloved dog Otis. This is not ok with Tim's wife Tonya (Traylor Howard) who has decided it's time for them to start a family, but Tim says he's not ready. One day, Otis finds a mask and takes it home where Tim finds it and decides to wear it to his workplace party. This is no ordinary mask as the wearer develops unique and wonderful powers, which Tim discovers and after the party, Tim comes home a different man, and nine months later, Tim and Tonya have their 'real' son, Alvey. In time, Alvey will soon display qualities that prove he is the son of the mask.

Jamie Kennedy as Tim, is fairly average and just didn't seem to have enough oomph and dynamism for the role - he seemed to drift through his role just comfortably, as did Traylor Howard as his wife Tonya. Alan Cumming is, as always, great fun but as the Norse God of Mischief he could have been a little more irreverent, with a bit more of a wickedness streak in his character. Otis the dog (Bear) and Alvey (Liam & Ryan Falconer) were all more than acceptable, but then who can't resist a cute dog and a cute baby, especially when they are possessed by the powers of the mask whilst trying to win over their father as the 'best son' and at the same time eliminate the other?

The real stars of 'Son Of The Mask' are however, the special effects. They are relentless and it is fun anticipating what will come next. Using a dog and a baby and transforming them into another character gave an endless scope of opportunities for crazy and wacky situations where special effects could be used to really create chaos and mayhem. Some of these effects are on the borderline of being too gross but perhaps think like a child and they might then be excellent, for example the nosy neighbour Betty (Magda Szubanski), has her head remodelled as a giant nose and when she sneezes the resulting mess is disgusting, much to the pleasure and delight of the children present at the screening I attended. There is also another fairly crude scene where Tim has to change Alvey's nappy and Alvey has to empty his bladder -enough said.

'Son Of The Mask' was filmed in Australia but the only real indication where the movie is set is a shot of the Sydney Harbour Bridge and the harbour. There is of course, the obligatory final showdown where the main characters all realise their mistakes and then re-evaluate, which wraps the movie up neatly. Definitely intended more so for children, 'Son Of The Mask' is a very colourful, fast-paced family movie that uses a message of the meaning of a father-son relationship to have loads of unabashed fun.