Snow White and the Huntsman Review 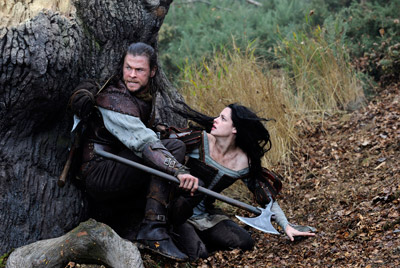 Snow White and the Huntsman Review

Synopsis: In the epic action-adventure Snow White and the Huntsman, Kristen Stewart (Twilight) plays the only person in the land fairer than the evil queen (Oscar® winner Charlize Theron) who is out to destroy her.

But what the wicked ruler never imagined is that the young woman threatening her reign has been training in the art of war with a huntsman (Chris Hemsworth, Thor) who was dispatched to kill her.

Sam Claflin (Pirates of the Caribbean: On Stranger Tides) joins the cast as the prince long enchanted by Snow White's beauty and power.

The breathtaking new vision of the legendary tale is from Joe Roth, the producer of Alice in Wonderland, producer Sam Mercer (The Sixth Sense) and acclaimed commercial director and state-of-the-art visualist Rupert Sanders.

Verdict: "Mirror, mirror on the wall who is fairest of them all"
"You are the fairest but…there is another destined to surpass you, consume her heart and you shall live forever"

And so begins the ominous and hauntingly twisted tale of Snow white and the Huntsman.

This thrilling adaptation likens itself more to the mysterious Brothers Grimm original, with its stunning gothic locations and Joan of Arc type heroine it seems this film was indeed destined, in epic nature.

The tale centres on Queen Ravenna's (Charlize Theron) quest to seek out youth, power and beauty at all costs, destroying all who dare to get in her way. Snow White (Kristen Stewart) guides the film as the strong integral heroine with 'lips red as blood' and 'hair black as night' she is the only one who can stop Ravenna from absolute corruption; 'She is life itself, she will heal the land'.

Director, Rupert Sanders created a realm where both dark and light live in their strongest forms. The dark forest notably laden deep with fear, so bleak and soul sucking that few survive its stony grip! Few, but the drunken and sentimental Scotsman; the Huntsman played by talented Australian actor Chris Hemsworth. Viewers will be impressed by his versatility and authenticity as the Huntsman showing many shades of his acting range throughout the film.

Rupert contrasts this sinister forest with its lighter counterpart 'Sanctuary' the home of the fairies, an enchanting forest with beauty so rich it envelops the screen. He also rewrites the roles of the dwarfs giving them intellect, wit and most importantly heart.

The characters are so alive they almost pounce off the screen (Charlize Theron's evil queen is humanised yet so very, very wicked!) with performances brilliantly executed (including their accents) you cannot help but fully invest in the characters journeys.

The dedicated actors sacrificed for their roles each lead injuring themselves for the sake of their art; Hemsworth received an accidental black eye from Kristen Stewart during the close up for a particular scene (and yes it is in the movie!), Stewart broke her thumb filming with dwarfs and Charlize Theron broke a rib screaming as Queen Ravenna.

Snow White and the Huntsman is a modernised take on a family fairy tale with performances to remember, but be warned if you dare ask who is fairest of them all you might not get the answer you were looking for.

Charlize Theron Interview for Snow White and the Huntsman
www.femail.com.au/charlize-theron-snow-white-and-the-huntsman.htm