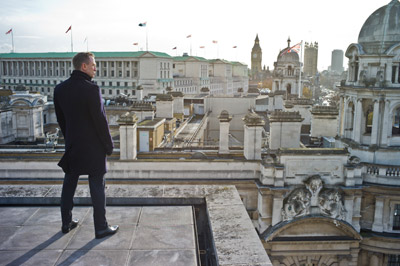 Synopsis: In Skyfall, Bond's loyalty to M is tested as her past comes back to haunt her. As MI6 comes under attack, 007 must track down and destroy the threat, no matter how personal the cost.

Verdict: Impressively Skyfall is everything we want from a modern Bond film as it honours tradition whilst presenting fresh action and complexity. The refreshingly different Skyfall takes an experienced and damaged James Bond (Daniel Craig) on a slightly different journey of intelligence and action which consist of M as the main target. M is also being forced to retire but wishes to stay in position to fix the horrendous mess that MI-6 is in which ultimately puts her in more danger.

In Skyfall's opening scene, Bond is accidentally shot by agency partner, Eve (Naomie Harris) during a chase to retrieve a drive that lists the identities of MI-6 agents, worldwide. Bond is classified dead and doesn't reappear until he hears news that the MI-6 headquarters has been attacked. On his return, Bond is determined to retrieve the information and protect M and the MI-6 agency.

The villain of Skyfall, Silva (Javier Bardem) is revengeful, mischievous, intelligent and more gruesomely deformed than before and of course no Bond film is complete without beautiful women, exotic locations, fast cars and unique gadgets (with thanks to Q).
Rating: *****