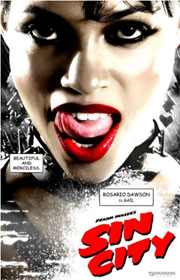 Walk Down The Right Back Alley In Sin City And You Can Find Anything.

Synopsis:
Welcome to Sin City. This town beckons to the tough, the corrupt, the broken-hearted. Some call it dark. Hard-boiled. Then there are those who call it home. Crooked cops. Sexy dames. Desperate vigilantes. Some are seeking revenge. Others lust after redemption. And then there are those hoping for a little of both. A universe of unlikely and reluctant heroes still trying to do the right thing in a city that refuses to care. Their stories - shocking, suspenseful and searing - come to the fore in a new motion picture from co-directors Frank Miller and Robert Rodriguez, and special guest director Quentin Tarantino.

With verve and invention, Miller and Rodriguez plucked the stories of Sin City right off the comic book page. Then, using cutting-edge digital filmmaking, they pasted these ultimate urban tales of louts, lugs, heroes and hussies to the screen without losing any of the comic's silhouetted look and staccato rhythms. 'Sin City' is brought to life through light and shadow - through clipped dialogue, stylised performances and visual invention.

My Verdict:
Taken straight from the pages of director Frank Miller's graphic novel, 'Sin City' translates onto the screen and plays out as comic book in a very, very unique style. There are three main stories told, each with a central character who tells his story in voice-over, much like the captions in a comic book. The film is mainly in black and white, but there is the use of specific areas and pieces of colour to emphasise particular people, objects and - body parts.

The main character Marv - an absolutely brilliant, almost unrecognisable Mickey Rourke - is an ugly, tough street fighter who beds prostitute Goldie but wakes up to find her dead beside him. He seeks revenge and is willing to sacrifice himself in his quest to find her killer.

John Hartigan (a so typical Bruce Willis) is one of the last good cops left in Sin City. He saves and protects an 11-year-old little girl during his last hour of duty before he retires and spends his time up against a character called Yellow Bastard who really is a twisted and nasty piece of work.

And finally there is Dwight (Clive Owen doing a first-rate job), a private investigator who inadvertently ends up trying to protect his friends amongst the ladies of the night.

There are other numerous well-known actors in 'Sin City' most of whom bring something different to their roles. Rosario Dawson is another who is almost unrecognisable as street queen Gail, Elijah Wood plays a very sick, demented Kevin, Benicio Del Toro as villain cop Jackie Boy and the list goes on.

The infamous Quentin Tarantino has a guest directing role where his trademark manner is used in a scene, which involves Benicio Del Toro and Clive Owen's characters -it is rather off the wall but very Tarantino and a welcome and worthy addition.

Much of the film was shot in front of green screens, with backgrounds and sometimes characters added later. This format allows for very stylistic and visually distinct images that are unlike anything ever seen before.

Be warned about 'Sin City' though as it is very violent with some of the violence merely suggested and taking place just off screen, but that doesn't detract from its impact. There are numerous killings, often bizarre, sadistic and merciless but that is way of life in the setting of (Ba)Sin City. As is often the case, bad language accompanies violence but not here, with the noticeable lack of any swearing or foul language -these people may be prone to violent behaviour but they still have standards.

There isn't another movie around that is even remotely like 'Sin City', such is its rareness and individuality, and it is therefore in a class all of its own. This is one of the most outstanding movies released in a long while for its exceptional concept that is uncompromisingly bold and brutal. Without doubt, 'Sin City' will go on to become a benchmark movie, having set an extraordinarily high standard. 'Sin City' is brilliant, a notable masterpiece and a definite must-see. This is the ultimate film noir.