The iconic Highlands of Scotland will be dramatically brought to the big screen this summer with the release of Disney Pixar's first fantasy adventure Brave, featuring some of Britain's biggest stars including Robbie Coltrane, Billy Connolly and Emma Thompson.

Disney Pixar has teamed up with Scotland's national tourism organisation, VisitScotland, on the project, the first time the studio has worked with a country's tourism organisation on such a scale. Brave will depict the myths, legends and romance of Scotland combining Scotland's spectacular scenery, fascinating folklore, unique heritage, majestic castles and legendary landscapes in the stunning animated form that Disney Pixar is renowned for.

Set in Scotland in a rugged and mythical time, and tapping into the country's rich history of epic battles and mystical legends, Brave focuses on Merida, a skilled archer and impetuous daughter of King Fergus (voice of Billy Connolly) and Queen Elinor (voice of Emma Thompson). Determined to carve her own path in life, Merida defies an age-old custom sacred to the uproarious lords of Scotland: massive Lord MacGuffin (voice of Kevin McKidd), surly Lord Macintosh (voice of Craig Ferguson) and cantankerous Lord Dingwall (voice of Robbie Coltrane). Merida's actions inadvertently unleash chaos and fury in the family, and when she turns to an eccentric Witch for help, she is granted an ill-fated wish. The ensuing peril forces Merida to discover the meaning of true bravery in order to undo a beastly curse before it's too late. "Brave" is directed by Mark Andrews ("Ratatouille" and "The Incredibles") and Brenda Chapman ("The Lion King" and "Prince of Egypt")

Inspired by the landscapes of Scotland, Brave will include images of the rolling heather clad hills and imposing peaks of the Scottish Highlands. The idyllic lochs of the country will come to life, and the shadowy forest glens and the myths of Scotland's standing stones will be replicated in animation never before seen on the big screen.

Live the Brave experience in Scotland - many of the below are locations featured in the film. 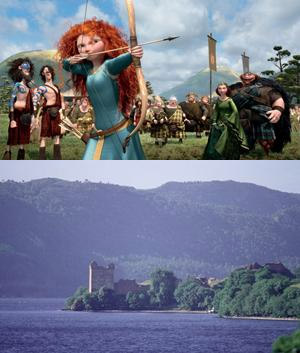 Play Archery like Merida
Beecraigs Country Park, Linlithgow: Nestled high in the Bathgate Hills near the historic town of Linlithgow, Beecraigs caters for a wide range of leisure and recreational activities within its 370 hectares, including archery, fishing, cycling and orienteering.
Laggan Outdoor Activity Centre, Dumfries and Galloway: Laggan Outdoor Activity Centre offers both indoor and outdoor archery. They teach you the basics of archery and most importantly, to have some fun. Once you have had an initial indoor lesson, you can move on to tackle the Archery Range. Set up in a forest, live like your ancestors and try Castle Laggan Attack, where you try and conquer the hill top castle.

Walk in beautiful forests
The Hermitage, Perthshire: Some of Europe's oldest and most remarkable trees can be found in Perthshire. With the colours changing with the seasons, getting out and about in picturesque Perthshire is a treat at any time of year. The Hermitage is a circular walk taking in the sites and waterfalls of the Hermitage as well as more open ground with pleasant countryside views. The Hermitage is a wild garden of hidden grottos, viewing areas, bridges, waterfalls and amazing trees. It is now owned by the National Trust for Scotland and is popular with visitors who enjoy climbing up through the network of paths to find hidden views of the tumbling water amongst the dense woodland.

Enjoy horse riding like Merida
Corrylair Trekking Centre, Huntly: Corrylair Farm Trekking Centre is set in a peaceful location of outstanding natural beauty near Huntly in the heart of Aberdeenshire. The centre offers quality riding along heather and forest trails.
Argyll Adventure, Inverary: Have a riding lesson, pony trek or scenic trek at Argyll Adventure on their well trained horses and ponies. 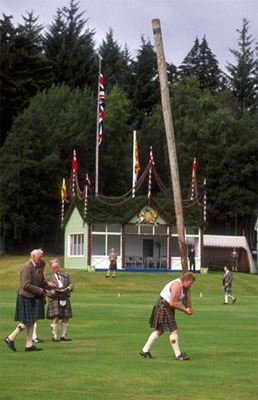 Be the King of the Castle like King Fergus
Dunnottar Castle, Stonehaven: A dramatic and evocative ruined cliff top fortress in a truly stunning setting. Discover the importance of Dunnottar, an impregnable Castle that holds many rich secrets of Scotland's colourful past.
William Wallace, Mary Queen of Scots, the Marquis of Montrose and the future King Charles II, all visited the Castle. Most famously though, it was at Dunnottar Castle that a small garrison held out against the might of Cromwell's army for eight months and saved the Scottish Crown Jewels, the 'Honours of Scotland', from destruction.
Eilean Donan Castle, Dornie, by Kyle of Lochalsh: As one of the most iconic images of Scotland, Eilean Donan is recognised all around the world. The Castle is situated on an island at the point where three great sea lochs meet, and is surrounded by majestic scenery. Although first inhabited around the 6th century, the first fortified castle was built in the mid-13th century and stood guard over the lands of Kintail. Since then, at least four different versions of the castle have been built and re-built as the feudal history of Scotland unfolded through the centuries. 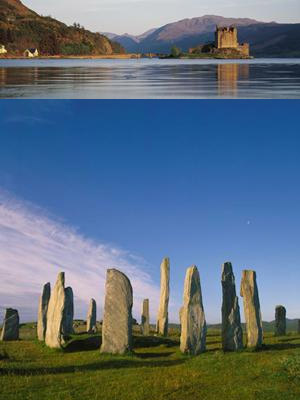 Explore the myths and legends of Scotland at standing stones
Callanish, Isle of Lewis: The magnificent Standing Stones of Callanish (or Calanais, which is the Gaelic version) are famous worldwide. No matter what the weather is like and however many visitors are present, these ancient stones have an enigmatic, magical quality that never fails to move.
Ring of Brodgar, Orkney: The Ring Of Brodgar Stone Circle And Henge, which is part of The Heart of Neolithic Orkney World Heritage Site, is a spectacular stone circle. The ring is surrounded by a large circular ditch or henge. It was one of the first sites to be scheduled in the British Isles (1882).