The wait is over – the full cast of Green Day's explosive award-winning Broadway phenomenon American Idiot is here and getting set to take Australia by storm. The national tour of this high-octane rock musical kicks off at the Sydney Opera House from 11 January, before playing strictly limited seasons at Adelaide Festival Centre's Her Majesty's Theatre from 19 January, Crown Theatre Perth from 2 February, Melbourne's Comedy Theatre from 23 February and Queensland Performing Arts Centre in Brisbane from 13 April. Just announced in addition to these dates, the tour will rock on to Darwin from May 3 at Playhouse, The Darwin Entertainment Centre.

Internationally, the role of St Jimmy has been played rotationally by rock personalities including: Billie Joe Armstrong, Melissa Etheridge, Chris Cheney and Phil Jamieson. The production's Executive Producer Nick Skubij is thrilled to add Sarah McLeod and Adalita to the Australian list. 'When casting, we wanted to attract the country's best talent, from multiple music genres to this show – Phil, Adalita and Sarah have fronted three of the biggest bands in Australia and to have them join a cast of established and emerging music theatre performers is going to be electric." Skubij states.

Sarah McLeod says on joining the cast "I am so excited to have been offered this role. I was secretly envious earlier this year when I heard Chris (Cheney) and Phil (Jamieson) were doing it. I've always wanted to be involved in musical theatre but so far hadn't found the right vehicle. And then BAM...a role that is so much up my alley. I totally relate to the split personality of Jesus Of Suburbia and St Jimmy. My whole life I've felt like I've lived with a little devil on my shoulder whispering in my ear psyching me into trouble! At least that's who I blame when I do get in trouble! The music is great too, it's punk but it's got this 60s feel to it with some of the melodies and harmonies that I just love. It's really cleverly put together. I can't wait to be a part of something so different, challenging and downright mega-town cool!"

As the lead singer/guitarist and primary songwriter for 3 x ARIA Award winning rock band The Superjesus, Sarah McLeod's career began in the late 90s. The Superjesus achieved platinum album sales and multiple Top 40 singles including Gravity, Down Again and Secret Agent Man which are still rock radio staples nationally. When The Superjesus hiatus began in the early 2000s, Sarah's solo career soared. Releasing a number of EP's and collaborations with The Living End's Chris Cheney, The Tea Party's Jeff Martin, and the Baby Animals' Mick Skelton, and a side project band called Screaming Bikini, Sarah solidified her musical ability across a range of genre's including hard rock, 50s & 60s barber shop and electronica. Sarah released Rocky's Diner in 2017 which debuted in the ARIA Top 20 albums chart.

Adalita remarks on the announcement "I'm so excited to be playing St Jimmy in American Idiot, it just feels like the right role that's come at the right time. Musical theatre is something I've done before but not on this scale. I know it can be a really high-pressure environment, but I love a challenge and I'm super keen to step up. The songs are incredible, the story is great, and I've always had a lot of respect for Green Day and Billie Joe Armstrong. It's a massive honour and I can't wait to get stuck in, it's going to be a blast!" 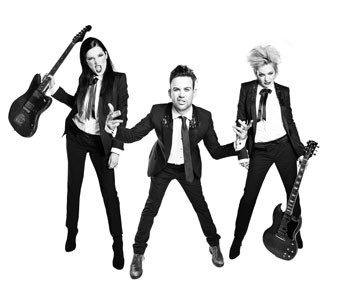 Adalita is best known as front woman for the multi-ARIA Award nominated Aussie rock band Magic Dirt, who have cemented their status as one of the country's best loved and highly respected bands. Since 1989, Adalita, principal songwriter and one of the founding members of Magic Dirt, has been writing and producing records, touring the world and is an integral part of the Australian music scene, garnering a passionate and loyal following and countless accolades. Magic Dirt received nine ARIA Award nominations and secured 4 x Top 40 releases on the ARIA Albums Chart. Since 2011 Adalita has forged a successful solo recording career and her second album All Day Venus blitzed the music scene, landing her a 2014 ARIA Award nomination for Best Female Artist and the Age/Music Victoria award for Best Female. Adalita is currently working on her highly-anticipated third studio album.

Joining Phil, Sarah and Adalita is an all-Australian cast led by Linden Furnell as Johnny, the protagonist of the story. Linden was the winner of the 2016 Rob Guest Endowment Award and was last seen in the Australian tour of Kinky Boots and in the sold-out seasons of RENT.

Phoebe Panaretos will reprise the role of Whatsername which earned her a 2017 Helpmann Award® nomination for Best Female Actor in a Supporting Role in a Musical. Phoebe made her professional debut when she was just 11 and since then has made international headlines being handpicked by Baz Lurhman to play the lead role of Fran in Strictly Ballroom the Musical.

Winner of two Tony Awards® and the 2010 Grammy Award® for Best Musical Show Album, American Idiot features every song from Green Day's iconic album American Idiot as well as several hits from their follow up release, 21st Century Breakdown. This album not only defined Green Day as a band but also gave a voice to a generation waiting for the opportunity to let their hair down and embrace their youth and individuality.

Developed by Green Day's Billie Joe Armstrong (lyrics) and Tony Award® winner Michael Mayer (Book and lyrics), American Idiot boldly took the American musical in a new direction, capturing not just the sound of a generation, but also the frustrations, fears, dreams and challenges of life in the media- saturated, post 9/11 era.

It tells the story of three best mates grappling with the decision to either challenge the status quo and break out of their aimless rut or to remain in the safe confines of their urban existence. Their quest for true meaning in a world full of violence and dissolution leads them on a journey of self-discovery, heartache and revelation.

Green Day's musical channels the grungy spirit of punk while also plucking at the heartstrings – discover what all the noise is about! 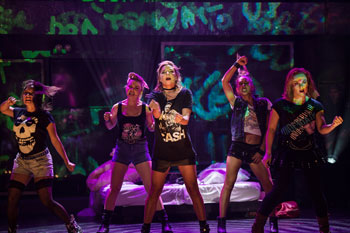 When The Superjesus hiatus began in the early 2000s, Sarah's solo career soared. She released a number of EP's and collaborations with The Living End's Chris Cheney, The Tea Party's Jeff Martin, and the Baby Animals' Mick Skelton, and a side project band called Screaming Bikini that solidified her musical ability across a range of genre's including hard rock, singer/songwriter, 50s & 60s barber shop and electronica.

Sarah's collaborations with DJ's from all over the globe resulted in her single He Doesn't Love You topping the dance charts at #1 in Eastern Europe for 16 weeks.

Living in London and New York before returning to Australia to reform The Superjesus to an overwhelming response, Sarah continues to uphold her reputation as a musical force, nominated for Frontman/woman Of The Year in Triple M's 2015 Rockies Awards amidst heavyweights Dave Grohl and Jimmy Barnes.

Following a series of sold out She Who Rocks tour dates, a new EP Love and Violence from The Superjesus imminent and a new solo record in the works, Sarah McLeod has proven to be one of Australia's most talented and versatile artists.

Sarah released Rocky's Diner in 2017 which debuted in the ARIA Top 20 albums chart.

Question: How has the Rocky's Diner tour been?

Sarah McLeod: It's been really great although it has been very long and exhausting, too. I've been on tour for three months and travelled all over the place, I don't feel as if I know who I am anymore. I wake up wondering -where the hell am I?' You get into the groove as the tour progresses.

I've woken up at home today which made me say -wow' as the tour has begun wrapping up, I've got a couple of shows, left after Christmas but the Rocky's Diner tour has pretty much finished, now.


Question: How did you get involved with Green Day's American Idiot?

Sarah McLeod: Sheer luck! From what I can assassinate, I was rehearsing in a room, in Sydney where I bumped into Glenn Moorhouse, who is the Musical Director of the show, and he was talking about Green Day's American Idiot and I said 'Oh man! That sounds AMAZING! I'd love to be involved in that, what a cool thing to do." He must have mulled over my comments for a while before speaking to the Producers as out of the blue I received an email asking if I wanted to be in Green Day's American Idiot! Do I? Are you kidding me? Yes!


Question: Can you tell us about the production, Green Day's American Idiot?

Sarah McLeod: The production involves a lot of fast moment and singing. The songs that Green Day had written where so descriptive, like a storyline, it's almost like they wrote the album for a musical. I wouldn't be surprised if the musical idea was in their head, all along as it's not written like a usual record album containing love and political songs – there are characters and storylines throughout their songs.

When Green Day's American Idiot was re-made into a musical the album was revamped and they added new songs to fill gaps, in the story.

The production is like one really long song with a small amount of dialogue in between – the whole story is delivered through the music which is rare in musicals. 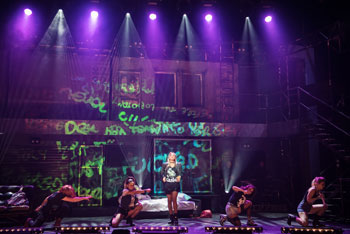 Question: Is the music on the American Idiot album different to that in the production?

Sarah McLeod: The way the songs were produced was changed for the production – they are still heavy in punk but they have a 50's and 60's vibe to their backing vocals with beautiful harmonies that almost have a Beach Boys twist. The songs are really; really clever in the way they have been put together.


Question: How have you been preparing ahead of the Green Day's American Idiot shows?

Sarah McLeod: The first thing I did was Google like mad – actually all I do now is Google like mad! There isn't a hell of a lot of the American Idiot tour online so I've been listening to the soundtrack and reading the script, a lot, to put it together, in my head.

I've been rehearsing the songs a lot and because they have a lot of lyrics, I've been listening to them over and over, again. Wherever I am, I am preparing; every time I'm on a plane I'm listening to the soundtrack and reading the script. As the storyline is in the music there are so many lines to remember I am memorising them whilst trying to understand my character. On top of that, I have to play guitar too so I've got to memorise chords, as well! It's all great fun, though.


Question: Is this your first musical theatre performance?

Sarah McLeod: Sure is! This is my maiden voyage.


Question: Can you tell us about your character St Jimmy?

Sarah McLeod: My character is badass (laughs). I am the bad, darker, alter-ego of the main character Johnny. Johnny moves to the big city, with some of his friends and I show him what I think you have to do to survive in a big city but it's more so what not to do, to survive and in the end it all catches up with him. I introduce Johnny to drugs, the confidence to approach women and become a risqué party boy. I am the little devil on Johnny's shoulder which makes him get into trouble, everywhere.