The world's most innovative cruise holiday company, Royal Caribbean International, today announced it will double the number of ships it sails from Australia next year, when it introduces the newest cruise ship ever to be based in Australia for Australians.

The company will homeport two superliners in Sydney from October 2011: Rhapsody of the Seas, currently in its third Australian summer season, will be joined by Radiance of the Seas, the first 21st Century cruise ship to be based in Australia. Offering cruises in Australia, New Zealand and the South Pacific during the summer months from October to April.

The announcement comes just 14 months after the Miami-headquartered company opened its Sydney office.

Royal Caribbean International is a global cruise brand with 21 ships currently in service, including the largest and most revolutionary cruise ship in the world, Oasis of the Seas, launched late last year.

Gavin Smith, managing director, Royal Caribbean Cruises Australia said, "The move is a demonstration of the strength of the local cruise market, and is in response to demand from American, European and Asian visitors to experience Australia and our region onboard our cruise ships. The move will double the number of tourists the company brings to Australia each year to more than 30,000.

"We're supported by the exceptional efforts of our international sales and marketing teams, particularly in North America, UK , Europe and Asia who help to generate demand for cruises down-under and our cruise-tour team does a great job in working with local tourism operators to provide a wide range of uniquely Australasian experiences for all our guests," he added.

With cruising by Australians tipped to represent as much as five per cent of the global cruise market by 2020 according to Access Economics, Royal Caribbean International is keen to capture a greater share of the local market.

"We've seen a marked increase in demand from Australians for the Royal Caribbean International brand over the past year and this is something we are keen to build upon. The announcement represents a multi-million dollar investment in Australia, and Sydney is an excellent port from which to base our operations down under," said Smith.

"I believe the Australian market is really looking for a greater choice in cruises, and our expansion will set a new standard in the expectations of Australians in what they want from their cruise holiday," he said.

The company believes its move will be welcomed by travel agents and tourism bodies around the country.

"The travel industry has been very supportive of Royal Caribbean International. We've found agents and their customers alike have really been looking for cruises that are genuinely different from the pack and offer a better cruising experience. Now, with two of our ships sailing Australian waters, they really have a choice," said Smith. 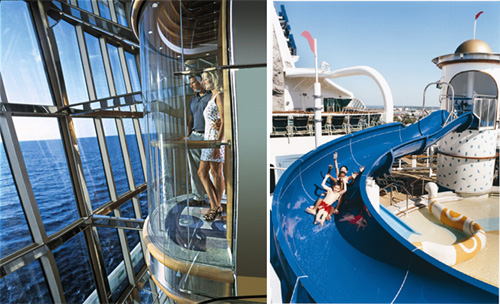 Radiance of the Seas offers a wide range of innovative features including a half basketball court, mini golf, dedicated cinema, kids' swimming area with waterslide, a stunning nine-deck atrium and five restaurants including two signature fine dining experiences - Portofino Italian and Chops Grille Steakhouse. Carrying 2,100 passengers, an impressive 55 per cent of guest cabins have a balcony. The ship also offers a rock climbing wall like that on Rhapsody of the Seas, along with similar features including an adults-only solarium, spa and fitness centre, children's Adventure Ocean club, Casino Royale and Broadway style theatre.

Royal Caribbean International Rhapsody of the Seas is currently sailing in Australasian waters and will depart for Alaska at the end of the season on April 12, returning in October this year for summer 2010-11.

The company will release itineraries for the two-ship 2011-12 cruise calendar in late March 2010.

Royal Caribbean International is a global cruise brand with 21 ships currently in service and one under construction. The line also offers unique cruise tour land packages in Alaska, Canada, Dubai, Europe, and Australia and New Zealand. For additional information or to make reservations, call your travel agent, visit www.royalcaribbean.com or call 1800 754 500. Travel professionals should go to www.cruisingpower.com or call 1300 754 500.