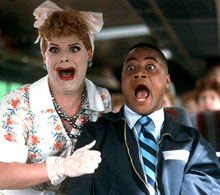 Join these crazy characters in their quest to WIN a $2 million cash prize!

Synopsis: An all-star cast proves just how far people will go for the chance to win $2 million in Jerry Zucker's RAT RACE. In the tradition of Zucker's AIRPLANE and NAKED GUN 2-1/2: THE SMELL OF FEAR, this film features wild chase scenes, slapstick comedy, sight gags, impossible situations, and zany characters. Whoopi Goldberg, Jon Lovitz, Rowan Atkinson, Cuba Gooding, Jr., Seth Green, and Breckin Meyer star as the lucky winners of special tokens in the slot machines at a Las Vegas casino. Casino owner John Cleese informs them that they are invited to participate in a race: the first of them to reach Silver City, New Mexico, will receive the $2 million cash prize. To make things interesting, there are no rules, which leads to the commandeering of a bus, a run-in with Nazis, the use of a high-speed experimental car, and revenge on a cheating boyfriend and that's just the beginning! In the meantime, the participants are really part of a bigger plan: high rollers are betting on which of them will win the cash. Watch for brief appearances by Kathy Bates, Dean Cain, and Wayne Knight. Also starring Amy Smart, Kathy Najimy, Lanai Chapman, and Vince Vieluf.