Synopsis: Fill the Void tells the story of an Orthodox Hassidic family from Tel Aviv. Eighteen-year-old Shira is the youngest daughter of the family. She is about to be married off to a promising young man of the same age and background. It is a dream-come-true, and Shira feels prepared and excited.

On Purim, her twenty-eight-year-old sister, Esther, dies while giving birth to her first child. The pain and grief that overwhelm the family postpone Shira-s promised match. Everything changes when an offer is proposed to match Yochay – the late Esther-s husband – to a widow from Belgium. Yochay feels it-s too early, although he realizes that sooner or later he must seriously consider getting married again.

When the girls-mother finds out that Yochay may leave the country with her only grandchild, she proposes a match between Shira and the widower. Shira will have to choose between her heart-s wish and her family duty …

It began with the fact that my work has always focused on relationships between men and women. Marriages are never forced in Judaism. In the Hasidic world in which this film is set, parents do raise proposed matches with their children, but even then the young couple must agree.

I was chatting with someone at the wedding of a friend's daughter, when a pretty young girl no older than eighteen came up to our table. She was wearing a gold watch, diamond earrings, and a ring that highlighted the stone in its setting – a clear indication that she was recently engaged. My friend congratulated her with a warm mazal tov, but still, there was something a little odd about their conversation. 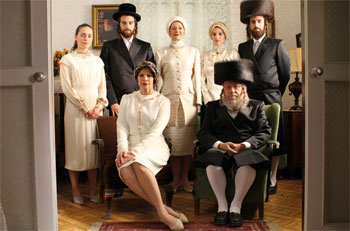 When the girl left, my friend said to me: 'Did you see that pretty young thing? She got engaged a month ago to the husband of her late sister." That was all I needed to set my imagination into overdrive. All it needed was a brief time to stew within me before I came up with the outline for the story of Fill the Void.
- Rama Burshtein

I set out on this journey out of a deep sense of pain. I felt that the ultra-Orthodox community has no voice in the cultural dialogue. You might even say we are mute. It's fine for someone on the outside to interpret us as long as someone on the inside is telling a story. Our political voice is loud – even boisterous – but our artistic and cultural voice remains muffled and faint. I'm not good at agendas and politics. What I am good at is telling a story. I'm good at telling about those things I'm passionate about, and what can I do? They are all tied to the ultra-Orthodox world of observance.

Fill the Void has nothing whatsoever to do with the religious-secular dialogue. That doesn't interest me quite as much. Fill the Void opens a peephole into a tiny story taken from a very special and complex world. By its very definition, it avoids making any comparison between the two worlds. It has enough self-confidence to tell its own story. I believe that the only way to bridge these two worlds is through unprejudiced honesty. If there is to be such a bridge, it must emerge from some common denominator that can be found in the heart.

I knew that I was making a little film that takes place mainly in the home. The tools at my disposal were the characters, the dialogues, the colours, and the frame. With me, this limited focus took shape when I was making movies within the ultra-Orthodox community. The lighting, soft textures, the frame … that was all the work of Asaf Sudry (cinematographer). I was left to watch in awe and take pleasure in the fact that all too often he understood me better than I even understood myself. Colourful costumes were a working assumption for the costume designer, but she derived everything from the Hasidic world in a way that I never could.

It has to do with my insistence on making a film that avoids the religious-secular dialogue. If the location was some ultra-Orthodox town, this film would be so removed from that dialogue that no one would even notice that it ignores the dispute between these two sides. The statement itself is expressed in the notion of locating the film in Tel Aviv but not giving too much of it and not relating in any way to the secular nature of the location. It's another Tel Aviv option. It may be less well-known, but it exists nonetheless in an authentic form. I live in Tel Aviv. I belong to an ultra-Orthodox Hasidic community, a community that offers a very vibrant and full life. We live peacefully with our secular neighbours. We don't interfere in their lives, and they don't interfere in ours

I love Jane Austen. She's romantic, intelligent, and full of humour. I read her as a girl, and I've seen films based on her work. The parallel is also quite obvious in that Fill the Void takes place in a world where the rules are rigid and clear. The characters are not looking for some way to burst out of that world. Instead, they are trying to find a way to live within it. Fill the Void has a historical air about it. It could just have easily have been located in Poland of the last century, in Brooklyn, or now, in Tel Aviv. It is somewhat cut off from the modern world, and the complications that make up the plot and their resolution have much in common with the way Jane Austen tells a story.