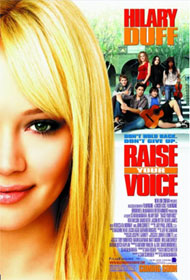 Don't Hold Back. Don't Give Up.

Synopsis:
'Raise Your Voice' stars Hilary Duff as Terri Fletcher, a small town girl with the voice of a big time singer. When a personal tragedy interrupts her steady life, Terri defies her father's wishes and secretly heads off to spend a summer at a Los Angeles performing arts academy. But the school brings a whole new set of challenges for Terri, who suddenly finds herself part of a highly competitive program in an intimidating new city. Terri rises to the occasion with the help of some new found friends, an encouraging teacher, and a first love that captures your heart.

My Verdict:
Hilary Duff stars in this saccharine sweet story about a young girls journey after she endures a tragedy and tries to overcome the consequences. Hilary is Terri Fletcher, a girl from Arizona who has always sung and composes her own music on her keyboard. Hilary adores her brother, Paul, who has videoed her performing in various ways and he secretly sends a DVD to the Bristol Hillman music school, which runs a summer camp for students that excel in music, hoping that Terri can make it. On Paul's graduation day, he is grounded but Terri has tickets to see their favourite rock band so they sneak out to see the band perform. That is Big Secret No. 1. On the way home from the performance, Paul is killed in an accident which Terri believes to be her fault - if she didn't have the tickets and convince Paul to go, the accident would never have happened. Later, a letter arrives from Bristol Hillman informing Terri that she has been accepted and to head to Los Angeles to attend. Her father (David Keith) bans her from going but she really wants to go so with the help from her mother (Rita Wilson) and her Aunt Nina (Rebecca De Mornay) they hatch a plan that lets Terri go. This is Big Secret No. 2. Off Terri goes to Los Angeles where she stumbles her way around music camp, slowly making friends with students and staff and finding love along the way. All the while, Terri is still trying to come to grips with her brother's death, keep the secret that she's there from her father, and perform at music camp to an acceptable level. This is a lot for a sixteen-year-old to deal with, but she somehow manages and hey, this is Hilary Duff.

It's not often that the tragedy in a movie occurs quite near the start and it's a bit of a shock when it does in this case. Just as we are getting to know Paul Fletcher as a character, he is killed, which was unsettling (and may be for very youngsters) with each family member struggling in their own way to deal with Paul's death. Terri's father is a rather gruff character throughout with her mother and Aunt Nina happy to deceive him with their plan to let Terri have some freedom by attending the music school. Eventually Terri's father does find out as you'd expect and it all ends ok after some anxious moments which pretty well sums how conventional the movie was at times, even concluding with an emotional vocal performance by Duff.

Sure, this is mostly a very predictable movie but that is no reason to dismiss its intention. It is certainly aimed at teen to pre-teen audiences, especially all those Hilary Duff fans who will feel satisfied with her performance, but there is also hope that some may feel inspired to go that extra mile with their own life by drawing from the story. It does try to stimulate thoughts and feelings along the lines of living life to the fullest and never looking back, with some encouragement we can all shine and similar cliché's, but so what as most of these ideas have some value. 'Raise Your Voice' is a movie for anyone that needs to see some inspiration at work or whom badly needs a Hilary Duff fix.