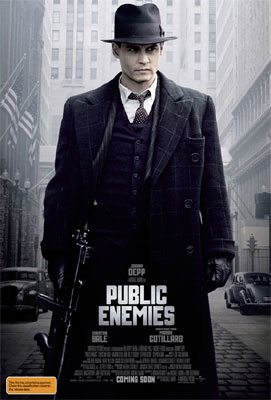 Synopsis:
In the action-thriller Public Enemies, acclaimed filmmaker Michael Mann directs Johnny Depp, Christian Bale, and Academy Award® winner Marion Cotillard (La Vie en Rose) in the incredible and true story of legendary Depression-era bank robber John Dillinger (Depp), the charismatic bank robber whose lightning raids made him the number one target of J. Edgar Hoover's fledgling FBI and its top agent, Melvin Purvis (Bale), and a folk hero to much of the downtrodden public. No one could stop Dillinger. No jail could hold him. His charm and audacious jailbreaks endeared him to almost everyone, from his girlfriend Billie Frechette (Cotillard), to an American public who had no sympathy for the banks that had plunged the country into the Depression.

My Verdict:
Having spent many years of his youth incarcerated, John Dillinger (Johnny Depp) learnt methods of bank robbery from other inmates and used this knowledge from May 1933 to begin a series of daring robberies across the Midwest of the United States to initially finance breaking-out his prison cohorts and ultimately becoming a folk hero during The Great Depression. Public Enemies is the story of Dillinger and the man who would ultimately stop his crime spree, FBI agent, Melvin Purvis (Christian Bale). It follows Dillinger as he routinely robs banks, gets arrested, escapes jails, robs banks, and continues this cycle until finally shot and ending his reign.

Johnny Depp is entirely at home and thoroughly convincing as Dillinger using his natural cheekiness and charm to beguile all he meets, so much so it's hard to imagine anyone else in the role. Depp delivers lines with ease often deliberately pausing before a witty remark giving Dillinger that extra bravado and audacity that he was noted for. Christian Bale has a much tougher job as agent Purvis, introduced briefly with the shooting of Pretty Boy Floyd and then later he just appears upon J. Edgar Hoover's (Billy Crudup) request with little other background info. Bale more than makes up for this lack of insight into his character as he diligently pursues Dillinger giving Purvis a purposeful determination and tenacity.

Public Enemies is disappointing as it fails to explore the era given the huge economic downturn at the time, the gangster mindset and the characters, especially Dillinger and Purvis. Dillinger is introduced as he breaks into a jail to breakout his friends, but we have no idea why he's really doing it or his history behind becoming a notorious criminal. Many of the other characters are underdeveloped and reduced to bit parts, only offering minimal impact to the story although Billie Frechette who became Dillinger's lover is played vibrantly by Marion Cotillard and a welcome addition.

There are many, many action scenes involving the bank robberies, the jail breakout, the infamous shootout at the Little Bohemia Lodge in Manitowish Waters, Wisconsin and others which are often filmed with a handheld camera. This overuse of handheld camerawork is frustrating even though its intent is the point of view aspect, but the heavy reliance of this device is simply annoying.

Visually it's not a colourful film with a grainy greyness that is occasionally interrupted with something bright, very much akin to the lifestyle of the era. It also summarises the overall general feel of Public Enemies - there are some wonderfully intense scenes, Johnny Depp is just sublime to watch and the action is awesome, but these are not enough to lift the whole film into becoming something brilliant and breathtaking.