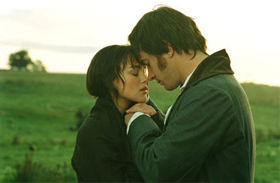 Synopsis:
If you've been living under a rock you may not know that Mr and Mrs Bennet (Donald Sutherland and Brenda Blethyn) have five daughters and little money in this the most widely known of Jane Austen's stories. Elizabeth (Keira Knightley), second eldest after the good natured Jane (Rosamund Pike), is a forthright young woman who, though longing for something to break the monotony of her quiet life, has nothing more in mind than preserving the family's dignity. When the splendidly wealthy Mr Bingley (Simon Woods) and his friend Mr Darcy (Matthew McFadyen) move in next door things start getting interesting.

My verdict:
Another version of 'Pride and Prejudice'? Another one? If, like me, you know the book back to front and have seen every version since Laurence Olivier and Greer Garson, your heart may sink a little. But fear not, this is a good one. Screenwriter Deborah Moggach and director Joe Wright capture the ironic tone of the novel. Lizzie, Jane and friend Charlotte Lucas (Claudie Blakley) are young women surveying the world around them with a fond but sharp eye.

What also emerges here is the direness of many of the situations these characters face. After taking an immediate dislike to the proud Mr Darcy, Lizzie rejects his eventual advances. When she begins to regret this, her unease is compounded by the knowledge that there's every chance she will never see him again. He lives in another part of the country and moves in rarified circles. She is a woman without prospects, unable to choose her own path. There's a lovely scene where Lizzie stands on a hill looking out at a vast landscape. She is totally alone, filled with promise and strength. Maybe she won't get Mr Darcy. Maybe she won't get much of anything at all. Who would care? This is the dark side of Austen. It may be inevitable that Lizzie will marry Darcy and that Jane will marry Bingley but matters are teetering on the edge of disaster right up to the end. This is a story about the unlikeliness of happiness, not the presumption of it. Thus, there is a rather breathless tension to much of the film. That it doesn't become melodrama is due, no doubt, to the strong central performances. Knightley's Lizzie, is certainly intelligent and bold but she's also very young and lacking in self-awareness. Surely there's never been a Mr Darcy less sure of himself, or more awkward, than McFadyen's. But it works. Lizzie represents to Darcy (as much as he to her) perhaps his only chance. This may be sentimental but it doesn't seem so, it seems honest.

This film has a few rough edges. Some scenes are a little grainy and dark. It also comes as a bit of a shock to see Mr Bingley heading out in the morning with a five o'clock shadow or Jane reassuring Lizzie, "I'm over it". Some of the hairstyles may be closer to 'Life of Brian' than perhaps intended but the benefit of this relaxed attitude is liberation from the strain of trying to be a sort of moving greeting card. More refreshingly still, this 'Pride and Prejudice' is genuinely cinematic. The camera is telling the story as much as other elements, from ingenious tracking shots in the ball scenes to witty focus pulls.

There's a tendency to take a rather Dickensian approach to dramatising this novel, with characters like Mr Collins and Lady Catherine de Bourg prompting directors to reach for the broad brush. Actually, for all his pompousness Mr Collins is a well-meaning and ordinary kind of man. Played as such by Tom Hollander, he is more believable and, as a result, funnier. Donald Sutherland brings something rare to Mr Bennet, making him a melancholy figure, flawed as opposed to just absent-minded. Even Mrs Bennet and the bookish Mary (Talulah Riley) are treated more sympathetically than usual; they may be embarrassing but they have their reasons. Subplots here aren't handled as mere obstacles to Lizzie's happy ending, on the assumption that that's all we really care about (the recent BBC adaptation was guilty of this). To minimise Mr Bingley's abandonment of Jane, Mr Collins' ridiculous proposal or Lady Catherine (Judi Dench) and her assured meddling is to miss the point. These are not trivial diversions from the story; they are the story. Two people fall in love but they have to deal with each other's families. This is not a heroic vision of love but a human one.

This 'Pride and Prejudice' won't be all things to all people. It's easy to wish there was more of this character or that, and perhaps you won't find all your favourite moments. But it manages to develop a style of its own while being faithful to the spirit of the novel and, in doing so, proves there's still more to know and say about these characters. And that in itself is surely an achievement.