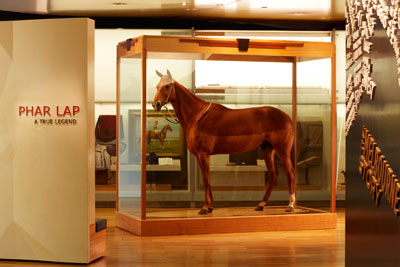 "This is a major coup for Melbourne as New Zealand has never before agreed to lend Big Red's skeleton to an international museum and it will be the first time it has travelled overseas since it arrived in New Zealand in 1933" said The Hon. Rob Hulls.

"This historic reunion of Phar Lap's hide and skeleton will be a fitting tribute to his important place in Victoria's racing history," said Brett Dunlop, Manager, Melbourne Museum. "I'm sure this will make Melbourne Museum's most popular exhibit an even greater attraction."

"This significant loan from Te Papa will be a great way to kick off celebrations for Melbourne Museum's 10th birthday in October", he added. "The timing is wonderful."

An assessment of the state of Phar Lap's skeleton undertaken by Te Papa conservators showed that the skeleton could be loaned to Melbourne Museum without major risks.

The skeleton will go on display from September 2010 until January 2011, and will be shown alongside Phar Lap's magnificent hide in the Melbourne Gallery at Melbourne Museum.

Deputy Premier and Racing Minister Rob Hulls made the call in April 2010 to reunite Phar Lap's heart from the National Museum of Australia and its skeleton from New Zealand's national museum Te Papa for a temporary exhibition at Melbourne Museum to celebrate the 150th running of the Melbourne Cup, as well as the 80th anniversary of the racing legend's 1930 Melbourne Cup win.

Unfortunately museum conservators decided that Phar Lap's heart was too fragile to travel to Melbourne from Canberra.

Over seven million visitors have come to Melbourne Museum in the past ten years, making it Australia's most popular museum. At least 350,000 people are expected to visit the Phar Lap display at Melbourne Museum during the exhibition period.

How long with Phar Lap be on show at the Melbourne Museum?

Brett Dunlop: The Phar Lap exhibition will be on show from September 2010 to January 2011.


How will this exhibit coincide with this year's Melbourne Cup?

Brett Dunlop: Phar Lap won the prestigious Melbourne Cup race in 1930. Phar Lap's reunion with his skeleton is a fitting way to celebrate the 150th running of the Melbourne Cup and the 80th anniversary of Phar Lap's winning that race.


When will Phar Lap arrive in Melbourne?


Can you share with us some information about the exhibit Phar Lap will be shown with?

Brett Dunlop: Phar Lap's skeleton will be shown next to his hide in the same space at the Melbourne Gallery along with a collection of items relating to Phar Lap including the distinctive red, black and white jockey's silks worn at each of Phar Lap's races, items belonging to Phar Lap's strapper, Tommy Woodcock and Phar Lap's registration certificate, saddle and blanket.


How popular do you believe this exhibit will be?

Brett Dunlop: A display of Phar Lap would be a major attraction for Melbourne Museum, which has more than 1 million visitors each year. At least 350,000 people are expected to visit the Phar Lap display at Melbourne Museum during the exhibition period.


Why do you believe Australians love Phar Lap and the journey?

Brett Dunlop: Phar Lap is truly a magnificent horse like no other. Wining an astonishing 36 races out of 41 races that he ran, Phar Lap became a media sensation. Phar Lap is Australia's most beloved horse and his story has been stamped onto the Australian imagination.

The images supplied in this correspondence are supplied solely for the promotion of Museum Victoria. The use of these images other than for the use for which they are supplied is not authorised and may infringe copyright and/or other licensing agreements. Museum Victoria supplies the images on the condition that all electronic copies of these images be deleted/destroyed once they have been used for the purpose for which they are supplied. It is also a condition of accepting these images that the source and the artist/photographer be acknowledged wherever the images are used.