Period Pain and How to Survive It 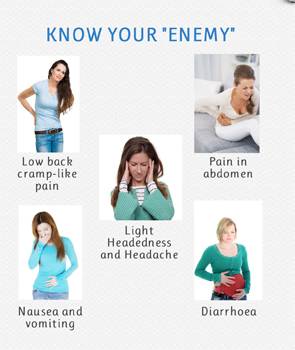 Period Pain and How to Survive It

In anticipation of the Jean Hailes Women's Health Week Osteopathy Australia reminds that according to some studies almost 75 percent of young women and 25 to 50 percent of adult women experience pain and discomfort during their period. Severe period pelvic pain can lead to absence from work, interfere with everyday life, causes stress and discomfort.

Period pain sometimes is an uncomfortable and sensitive topic for conversation, however it affects women's health and wellbeing, therefore deserves increased attention. A British survey of 600 women conducted last year found that 10 percent were regularly bedridden by their period pains. Four out of 10 women claimed that the period pain stops them from concentrating on work and affects their career. A third of women added that the constant period pain makes them feel depressed, the rest insisted that period pains stopped them from socialising.

Moreover, a study of 1000 girls aged 16-18 years in Canberra found that 21% of the girls had severe pain with periods and 26% had missed school because of period symptoms.

In general pain is considered to be a normal symptom during the periods, however excessive period pain is called dysmenorrhoea and is considered to be abnormal. Dysmenorrhoea is a very subjective disorder as it varies greatly depending on the pain tolerance of a woman. Primary dysmenorrhea occurs to young women with no pelvic abnormality however the secondary dysmenorrhea, which is common among older woman arises as a result of an underlying condition and seriously affects the health wellbeing. Secondary dysmenorrhea might lead to endometriosis, which is treated with medications.

The symptoms of dysmenorrhea are:
Low back cramp-like pain;
Pain in abdomen and inner thighs;
Nausea and vomiting;
Diarrhoea;
Light headedness. 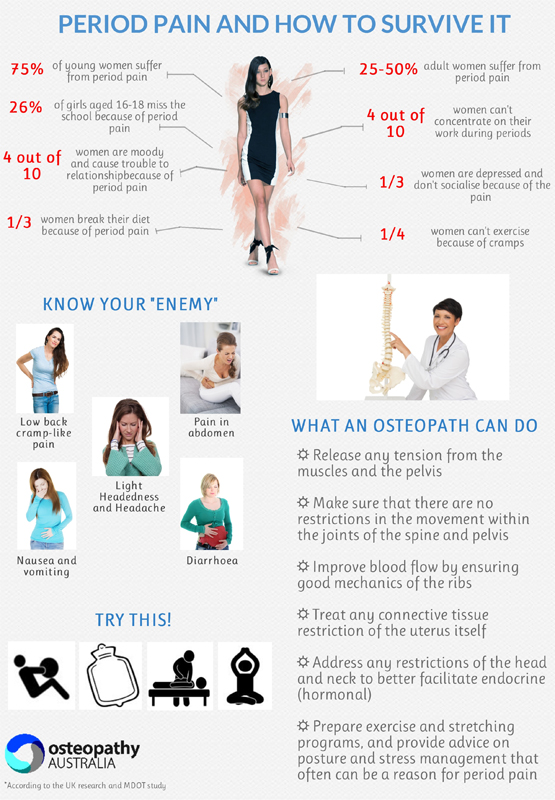 Pain relieving medications are very popular among the patients with dysmenorrhea, although studies suggest that between 30-50 percent of the adult population use some form of complementary medicine including osteopathic treatments – a combination of traditional methods and modern scientific philosophies.

'For cases of primary dysmenorrhea osteopathic treatments are very beneficial. An osteopath will make sure that there are no restrictions in the movement within the joints of the spine and pelvis, which can lead to period pain, release any tension from the muscles of the pelvis, which in turn will improve the blood and nerve supply to the organs," says osteopath Chris Reeves. 'All parts of the body function together in an integrated manner. If one part of the body is restricted, then the rest of the body must adapt and compensate for this."

'Nerve supply to the uterus is derived mainly from 3 different sections of the spine; the lower thoracic, lumbar and sacral regions. An osteopath can improve blood flow by ensuring good mechanics of the ribs, working through the lower abdomen to treat any connective tissue restriction of the uterus itself, such as tension in the ligaments supporting the uterus, and addressing any restrictions of the head and neck to better facilitate endocrine (hormonal) and autonomic nervous system function."

Osteopaths can also help to prepare exercise and stretching programs, and provide advice on posture and stress management that often can be a reason for period pain.

To reduce the pain while being at home women can use other methods, though the relief might be temporary:
Regular exercise like gentle swimming, walking or cycling and attention to overall physical fitness may help to manage period pain.
Applying heat to your abdomen with a heat pad or hot water bottle can help to ease your pain.
Massage - light circular massage around your lower abdomen may help.
Relaxation techniques - you might want to try a relaxing activity, such as yoga or pilates, to help distract you from feelings of pain and discomfort.

Did you know that?