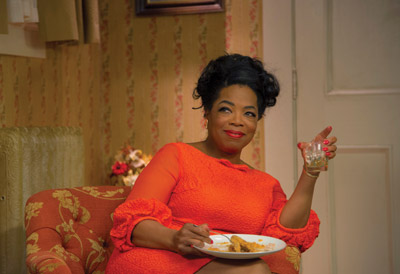 Inspired by Wil Haygood's 2008 Washington Post article 'A Butler Well Served by This Election" about the real life of former White House butler Eugene Allen, Lee Daniels' The Butler traces the dramatic civil rights struggles that ultimately made it possible for an African American to rise to the highest position in the White House with the election of Barack Obama in 2008.

Opening in the fiercely segregated South in 1926, young Cecil Gaines works with his family in the cotton fields of Macon, GA. The tragic death of his father at the hands of his employer opens up unexpected opportunities for a young and impressionable Cecil, who is then taught the duties of a house servant under the critical eye of the plantation's white matriarch. Armed with these new skills and concerned for his own life, Cecil sets out for a better life as a young man. 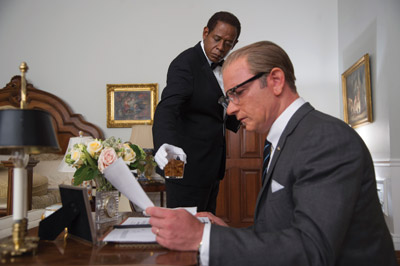 Struggling outside of the confines of the plantation, an act of desperation introduces Cecil to a much-needed father figure, who provides guidance and a job at a local hotel. Thriving under his tutelage, Cecil is encouraged to move to Washington, DC, to take a position at an elite hotel. Excelling there, Cecil is noticed by a White House administrator, who gives him the chance of a lifetime: a job as a butler at 1600 Pennsylvania Avenue, insuring a comfortable middle-class life for Cecil's wife Gloria (Oscar® nominee Oprah Winfrey) and sons Louis (David Oyelowo) and Charlie (Elijah Kelley), far from the cotton fields of the South.

While Presidents come and go, from Eisenhower through Reagan, Cecil and the rest of the butler staff remain, serving in the background as firsthand but silent witnesses to history and the inner workings of the Oval Office while the civil rights movement unfolds. Regardless of his personal opinions, Cecil remains fiercely committed to his duties at the White House, but tensions grow at home as his sons become affected by the social and political upheaval that characterized the 1960s and 70s. Louis chooses to attend college in the South so that he may become an active part of the burgeoning civil rights movement, participating in department store sit-ins and freedom rides - putting him in physical danger and widening his rift with Cecil. Charlie instead elects to work for change from within, enlisting to fight for his country in Vietnam. Facing these disruptions to her family, as well as Cecil's neglect as he tends to his First Family, Gloria turns to alcohol and the embrace of a neighbour. As he grapples with his family's actions and his own conscience, Cecil finds himself at the crossroads of previously unimaginable social change.

Through the eyes and emotions of the Gaines family, Daniels' film follows the changing tides of American politics and race relations; from the assassinations of John F. Kennedy and Martin Luther King, to the Freedom Riders and Black Panther movements, to the war in Vietnam and the Watergate scandal, Cecil experiences the effects of these events as both an insider and a family man. Drawn into conflict with his headstrong sons, eager to forge their own paths in a rapidly transforming world, Cecil's story is as universal as it is extraordinary, speaking to the way each generation attempts to define the American Dream.

In 2008, during the weeks leading up to the historic election of Barack Obama, The Washington Post writer and former foreign correspondent Wil Haygood made a mission for himself: to find an African American who had worked in the White House and witnessed the Civil Rights movement from behind the scenes. After countless phone calls, Wil Haygood discovered the person he was looking for right under his nose in Washington, DC. His name was Eugene Allen, he was 89 years old, and he had served under eight presidents from the 1950s through the 1980s. Meeting with Eugene Allen and his wife Helene for a number of hours, the writer was able to profile a man whose firsthand access to some of the nation's most pivotal events – and the men in power behind them – was unprecedented.

Sony Pictures Entertainment co-chairman Amy Pascal originally read the interview with Allen in the Washington Post and brought the material to the attention of producer Laura Ziskin. The Post ran the story on the Friday following Obama's victory. Laura Ziskin, the powerhouse behind such hits as Pretty Woman, As Good As It Gets, and the Spider-man franchise, immediately agreed that Eugene Allen's story had extraordinary potential to be made into an epic film. Despite being approached by several other producers about the rights to Allen's story, Wil Haygood was convinced that Laura ZIskin's passion and vision for the project were unmatched and agreed that they should get the ball rolling on making the film as soon as possible. 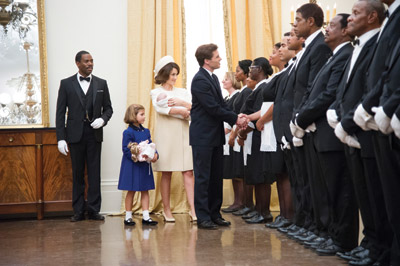 Sony optioned rights to the project, with screenwriter Danny Strong – most recently the writer of HBO's critically acclaimed film Game Change – in charge of creating a fictional story inspired by Wil Haygood's article. Ultimately Sony chose to not move forward with the film. This left Laura Ziskin, whose passion for the project was unfailing, to return to the drawing board and round up funding independently. In hunting down potential investors, Laura Ziskin looked to approach business people and film enthusiasts who were particularly dedicated to arts projects with a social message, like BET cofounder Sheila Johnson. Eventually, others such as Michael Finley and Buddy Patrick came on board. Ultimately, it would take a village to get this movie off the ground with several different financing entities committing to bring this project to the finish line, also including Earl Stafford, Harry I. Martin, Jr., Charles Saveur Bonan, Film Partners and Al Film.

Laura Ziskin had her eye on Lee Daniels to direct the project, who was fresh from his tremendous success with the Oscar-winning Precious. When the film that Lee Daniels was attached to at the time, Selma, ended up not getting off the ground, he was able to sign on with Laura Ziskin instead. His expertise in the independent film world also proved helpful in raising money for the production. Lee Daniels and Laura Ziskin along with her producing partner, Pam Williams, worked closely together developing the project, even as she became more and more ill with cancer. With Laura Ziskin's sad and untimely death in June 2011, Pam Williams took the reins on getting the rest of the film in place.

Forest Whitaker and Oprah Winfrey were next to sign on in the lead roles of Cecil and Gloria Gaines. David Oyelowo, who worked with Lee Daniels in The Paperboy, also signed on to play Louis, their headstrong activist son. Soon came a list of confirmed all-star talent, including Yaya Alafia, Mariah Carey, John Cusack, Jane Fonda, Cuba Gooding, Jr., Terrence Howard, Elijah Kelley, Minka Kelly, Lenny Kravitz, James Marsden, Alex Pettyfer, Vanessa Redgrave, Alan Rickman, Liev Schreiber and Robin Williams. Many of the actors signed on with such a love for the project, they agreed to accept far less pay than usual; some even were willing to cancel previous engagements and tour dates to take part in the filming. Lee Daniels shot the film in New Orleans, during the summer of 2012, over the course of 41 days – a relatively tight period of time considering the historical scope of the production and the size of its cast.