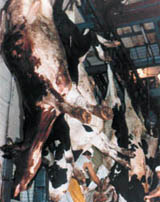 People for the Ethical Treatment of Animals (PETA) "Murder King" Campaign, which has involved provocative ads, celebrity support from Alec Baldwin, James Cromwell, and Richard Pryor, and more than 800 protests at Burger King restaurants worldwide, has been called off following the fast-food giant's announcement today that it will exceed the animal welfare standards that PETA negotiated with McDonald's last year after similar protests. PETA is now eyeing other chains, such as Wendy's, as possible targets for animal welfare improvements.Under Burger King's new guidelines, the company:


Says PETA President Ingrid Newkirk, "The only way to avoid cruelty in meat production is to go vegetarian, but today Burger King has taken giant steps to improve the lives of millions of animals. We are ending our Burger King protest and examining other chains, such as Wendy's, as potential targets for improvements in animal welfare."

To find out more about the plight of animals, please visit and support http://www.animal-lib.org.au