MUNA In My Way MUNA In My Way

MUNA have released new track -In My Way', out now!

What a year it has been for MUNA! Since the release of their critically acclaimed debut album 'About U" – MUNA has been featured in LA Times, Time,  Billboard (Best Albums of 2017 So Far) and the UK's Clash, The Line of Best Fit, NME and The Sunday Times Style – to name a few! They performed a powerful rendition of their single -I Know A Place' on Jimmy Kimmel Live that received praise from Stereogum and DIY. MUNA remixed Katy Perry's -Bon Appetite' and Miike Snow and MNEK remixed their track -I Know A Place!' Most recently, they opened for Bleachers on their US tour, stopped by Osheaga and Outside Lands festivals and hit the UK for press.

MUNA was handpicked to be direct support by Harry Styles on his North America and European tour this Sept/Oct. The tour kicks off in San Francisco early next week, and the first show in Europe will be in Paris on October 25th. The girls will also be headlining their own show at London's Heaven on Halloween. MUNA I Know A Place

Los Angeles based trio MUNA and British singer, songwriter, and producer MNEK have released 'I Know A Place'...

Due to overwhelming demand, Harry Styles has added 56 new show dates in 2018 to his sold-out world tour.

Niall Horan, Zayn Malik, Liam Payne, Harry Styles and Louis Tomlinson formed in 2010 and have since gone on to... 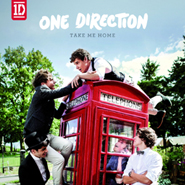 One Direction Take Me Home Album

One Direction Take Me Home Album, today revealed the release date and the artwork for their hugely anticipated...

Morgan Spurlock One Direction: This Is Us

When Niall Horan, Zayn Malik, Liam Payne, Harry Styles and Louis Tomlinson auditioned for The X Factor in the...

Harry Styles has released his highly anticipated debut single .Sign of the Times..

One Direction: Reaching For The Stars DVD

With previously unseen footage and performances from their 2013 world tour, this tribute charts One Direction's...

The figures are styled in their signature smart-casual, colour-coordinated stage fashions, with outfits donated...

One Direction: This is Us DVDs

Thanks to Universal Sony here is your chance to win one of 10 x One Direction: This is Us on DVD.

One Direction: All For One DVDs

Thanks to Transmission Home Entertainment here is your chance to win one of 5 x One Direction: All For One DVDs.

One Direction: This Is Us DVD

The film is the ultimate addition to every fan's collection, loaded with never-before-seen footage giving...

The album was executive produced by Jeff Bhasker, with additional production from Alex Salibian, Tyler Johnson...

One Direction at Madame Tussauds Sydney

Be the first to visit One Direction Wax Figures in Sydney

Win one of 5 x double passes to be amongst some of the first to see the One Direction wax figures in Sydney and...

One Direction: All For One DVD

An absolute must-see for any 1D fan, this documentary is jam-packed with explosive behind-the-scenes footage and...