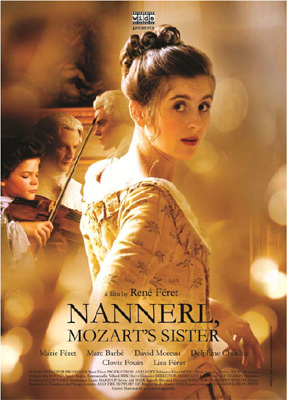 Synopsis: Mozart had an older sister called Nannerl. Child prodigy, she was introduced with her brother to all European courts. In the end of a three year family travel, she met in Versailles Louis XV's son who encouraged her to write music. But Nannerl is a girl and a girl does not have the right to compose...


Born in 1945, René Féret first wanted to be an actor. He studied acting at the Ecole Nationale d'Art Dramatique of Strasbourg. Because of his father's death, he was sent to a psychiatric hospital and this painful experience inspired his first long feature film L'Histoire de Paul which was awarded by the Jean Vigo Price in 1975. He then became successful thanks to his following movies, also biographical and all located in North of France where he comes from.René Féret founded his own production company JLM Productions in the late 90's.

Nannerl, Camille, Adèle and others
A bulky correspondence of Mozart's family exists. It starts with Leopold's letters, Mozart's father, to his friend from Salzburg, who financially helped him to carry out this madness: crossing Europe in family during three years. By gratitude, Léopold narrated him his journey. Introducing his prodigy's children to all European courts was an extraordinary adventure.

When I read those letters, I imagined their journey, the freezing cold of the winter inside the horsedrawn carriage, the lugubrious inns and suddenly, Versailles, the court, the king presentation, the small gifts of Adults, the snuffboxes, the nice dresses and the fear to always missing money or to be carried by the disease and of course the keen work of the ceaseless repetitions. Then Nannerl's character appeared. Mozart had a sister! Almost five years older than him. She was prodigy too, a marvellous singer and a remarkable harpsichordist. She belonged to the show. Since she was 3 years old, her father taught her the music. But she was a girl and Wolfgang was born. It is undoubtedly because of her, elder playing the harpsichord under the amazed eyes of the child that the aptitudes of the little genius magically developed. Wolfgang was going to outshine Nannerl. Too old to keep sharing her room with her brother, she is cast off of the journey. She devoted her life to her father then to the memory of her brother which she survives during almost forty years.

I thought of other sacrificed female characters: Camille Claudel, Adele H, and all of them forgotten forever. I wanted to make a film. 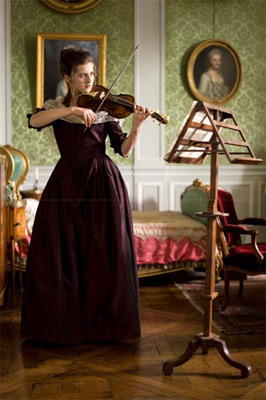 Father and daughter(s)
I have often integrated creative process into my own family. My son Julien is my first assistant and Fabienne, my wife, is the editor of my films. We produce and distribute together. I naturally thought of my daughter Marie (15 years old) for the role of teenager Nannerl. She had already shown me her energy and determination in "Il a suffi que maman s'en aille..." with Jean- François Stévenin. My second daughter, Lisa (13 years old), plays Louise de France, one of Louis XV's daughters, "locked up" in an abbey, far from the court. 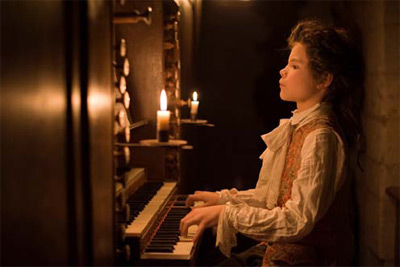 Keen of modesty and anonymity, I myself enjoyed bringing together Marc Barbé and Delphine Chuillot to incarnate the Mozarts, famous for having been the most beautiful couple of Salzburg. They entered our small family with ease and talent.

All these choices had consequences. The CNC supported me for the writing and the film took advantage of the "avance sur recettes" and the decisive support of the Région Ile de France, supplemented by a small assistance from the Région Limousin. Neither the Hertzian channels, nor Canal Plus, followed us. The gap is bigger and bigger between these two funding sources.

It was necessary to hold the bet, to shoot nevertheless 51 days instead of the 35 that any production would have imposed to me, to obtain handing-over, to impose miracles, to shoot in the splendid decorations of the Chateau of Versailles and "to make a success of our bet". The Mozarts gave us the example. And the bet of the continuous independence with the distribution which we ensure ourselves, with a real team of professional friends who supported us and who helped us to impose in the delirious market of the film industry.

Nannerl's novel
I plunged myself into the 18th century, the true one, the one of History books, of biographies and correspondences. I was interested in manners of the court, of Louis XV and his mistresses, the Dolphin, widower at 17 years, deeply religious, scandalized by the dissolute life of his father.Then I started to dream.

I wanted to offer to Nannerl the opportunity to see musical creation growing in her and I imagined her father preventing her, as he prevented her from playing the violin, because it was not suitable for a girl.

Nannerl met Louise de France in an abbey lost in the forest. Louise entrusted her a letter for Versailles. Nannerl must be dressed up as a man to approach the Dolphin who orders a piece of music of her composition. The tale was born.

An imaginary music
In general, I do not like film soundtracks very much.

But in that case, music is an alive, essential character. It was necessary to invent the music Nannerl Mozart could have written, not Wolfgang's, a different music but still belonging to the Mozart family and falling under the Baroque. Gabriel Yared, that I met thirty years ago during the shooting of "Sarah" (by Maurice Dugowson and produced by myself), passionate by Mozart, loved the project and introduced me to Marie-Jeanne Séréro. He was right. We had to work with a woman. She took up the challenge with audacity: writing a music from the past, Mozart's sister's music, while being a contemporary musician!

Playing Mozart
I had in mind "Barry Lyndon" by Kubrick of course but also "The Rise of Louis XIV" by Rossellini. I like the beauty, the slowness of these films, the didactic side also, the psychological absence of playing.

I like the incarnation in the "not-play". This "not-play" would be not to fall into the stereotype from the play reflex, to make that the text is heard, that one enjoys discovering the truth of the characters starting from their behaviours.

All the actors did so, especially my daughters, establishing a distance between what is said and what is felt, hence some kind of a distance, a true slowness, a way for the spectator to receive the dramaturgy while remaining lucid, with humour, elegance without excluding the emotion. It is the history which affects: the great tragic destiny of the young Mozart. 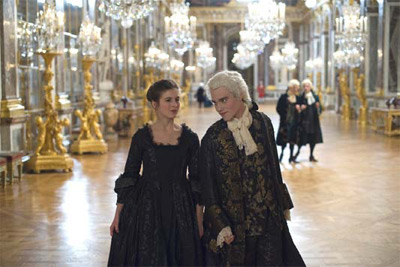