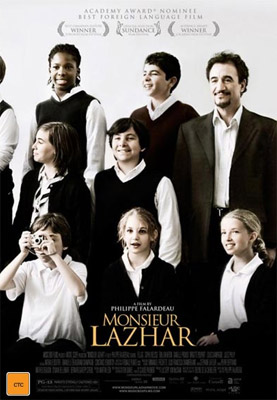 Synopsis: The acclaimed new film from the producers of the award winning Incendies, Monsieur Lazhar is a profoundly moving story about a group of young schoolchildren coming to terms with the adult world well before their time, and the inspirational educator who transforms their lives.

The story is set in Montreal, where the beloved teacher of a Year 6 class has abruptly passed away. Having learned of the incident in the newspaper, Bachir Lazhar (Fellag), a 55 year-old Algerian immigrant, makes his way to the school and offers his services as a substitute teacher. He's in the right place at the right time, and is quickly hired to fill in.

The substantial cultural gap between Lazhar and his new class is immediately apparent, but little by little, Lazhar comes to understand this motley but endearing group, among whom are Alice (Sophie Nélisse) and Simon (Émilien Néron), two charismatic pupils particularly affected by their teacher's passing. Yet while the class begins to heal, nobody in the school is aware of Lazhar's painful past; nor do they suspect that his own place in the world is in jeopardy.

Adapting an award-winning play by Évelyne de la Chenelière, acclaimed Québécois writer-director Philippe Falardeau has crafted an indelible and universal story of compassion that earns every one of its extraordinary moments through insight, empathy and eloquence.