Synopsis: Andrew Neyman is a 19-year-old jazz drummer, dreaming of greatness but unsure if his dream will ever come true. Haunted by the failed writing career of his father, Andrew is determined to rise to the top of the country's most elite music conservatory. One night, Terence Fletcher, a conductor equally known for his talent for teaching as he is for the terrifying method of his instruction, discovers Andrew practicing the drums. Even though Fletcher says very little to him that night, he ignites in Andrew a passion to achieve his goal. To Andrew's surprise, the next day, Fletcher requests that he be transferred into his band. This single act changes the young man's life forever.

At first, Andrew is an 'alternate," confined to turning the pages of the 'core" drummer. But at the band's next competition, in an act of either serendipity or sabotage, the core drummer's sheet music is misplaced. Having committed the music to memory, Andrew gets the opportunity to play. Though the act further alienates him from his fellow musicians, the band nonetheless wins the competition, and he seems poised to become Fletcher's new 'favorite son."

Emboldened by this acceptance, Andrew summons the courage to ask out Nicole, the counter girl at his local theater for whom he'd nursed a silent and unrequited crush. But on that date, Andrew's musical preoccupations threaten to derail even his most genuine romantic overtures.

The nearer to perfection Andrew gets, the narrower his circle of intimates becomes until he is left only with Fletcher"and even that relationship is jeopardized by the ferocity of Andrew's ambitions.

A journey that can be seen alternately as a descent into madness or an ascent to greatness comes to a crescendo on the biggest platform for Andrew's talents"the unforgiving stage of Carnegie Hall.

There are a lot of movies about the joy of music. But as a young drummer in a conservatory-style high school jazz orchestra, the emotion I felt the most frequently was a different one: fear. Fear of missing a beat. Fear of losing tempo. Most overwhelmingly, fear of my conductor. With Whiplash, I wanted to make a movie about music that felt like a war movie, or a gangster movie - where instruments replaced weapons, where words felt as violent as guns, and where the action unfolded not on a battlefield, but in a school rehearsal room, or on a concert stage. 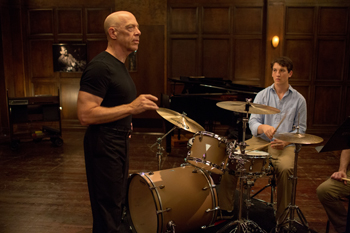 The jazz legend that has always intrigued me the most is that of the young Charlie Parker. Now, if you'd asked any of Charlie's contemporaries when he was 16 or 17 who among the young Kansas City cats would grow to be the greatest musician of his generation, none would have picked Charlie. To the old-timers, he was just an eager kid of middling talent. And yet, somehow, something happened in Charlie's late teens, because by the age of 19 he was playing some of the greatest music ever heard. How did this happen? Well, so the story goes, one night.

Charlie participated in a cutting session at the Reno Club and screwed up his solo: the resident drummer threw a cymbal at his head and the audience jeered him off the stage. He went to bed with tears in his eyes, muttering "I'll fix them cats." He practiced like a madman for the next year, and when he returned to the Reno, he wowed the world.

As a high schooler, I spent hours every day locked away in a soundproofed basement, practicing drums until my hands bled, dreaming of just such a transformation. Spurring me on was a larger-than- life local hero, my school's conductor, who had managed his own dazzling transformation over the past decade: turning a New Jersey public school's fledgling jazz band into the best program of its kind in the country according to Down Beat Magazine, an ensemble that had played at two Presidential inaugurations and opened the JVC Jazz Festival in New York. For years, drumming became my life, and for the first time music became associated in my mind, above all else, with"not entertainment, or fun, or self-expression, but"fear.

Looking back, I wonder how and why this happened. My journey as a drummer culminated in national honors and awards, but I can still vividly recall the nightmares, the nausea and skipped meals, the days of unmanageable anxiety"all in the service of a style of music that is, on its surface, all about freedom and joy. More crucial than anything else to me in those days was a single relationship"that between me and my teacher. It is that relationship"so loaded and fraught with tension"that I wanted to really explore in Whiplash. If it is a teacher's duty to push a student to greatness, then at what point is enough enough? Did Charlie Parker need to be jeered off the stage in order to become 'Bird"? How do you make someone great?

To capture the emotions I felt in my drumming years, I wanted to shoot each musical performance in the movie as though it were a life-or-death contest - a car chase, say, or a bank robbery. I wanted to showcase all the details I remembered - all the dirt and grime and effort that go into a work of music. The earplugs and broken sticks, the blisters and cut hands, the incessant counting and the beeping metronomes and the sweat and fatigue. At the same time, I wanted to capture those fleeting moments of beauty that music allows"and that film can so movingly capture. When you listen to a Charlie Parker solo, you enter a state of bliss. Was all the suffering Parker endured for his art worth it, just so we could enjoy the results decades later? I have no idea, but to me it's a question worth asking, one that reaches beyond music - beyond even the arts - and touches on a concept that's so simple but so fundamental to the American character: greatness at any cost.
- Damien Chazelle