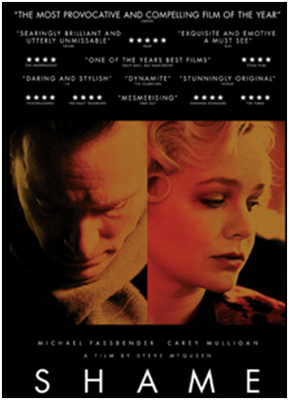 Synopsis: If Steve McQueen's first film, Hunger, was about a man with no freedom, Shame is an examination of a character who has all the western freedoms and who uses his body to create his own prison.

Brandon (Michael Fassbender) is a young successful thirty-something living comfortably in his apartment in New York. As a distraction from day-to-day cubicle life, he seduces women, juggling a string of doomed romances and one-night stands.

The tightly controlled rhythm of Brandon's life begins to collapse, however, when his wayward, unruly sister Sissy (Carey Mulligan) arrives for an unannounced visit. Her disruptive presence in his life propels Brandon further into New York's dark underbelly as he tries to escape her need for connection and the memories she stands for.

Shame is a compelling and timely examination of the nature of need, how we live our lives and the experiences that shape us.


About the Production
Shame was filmed in New York City in February and March of 2011. The film is the second collaboration to involve director Steve McQueen (Hunger) and actor Michael Fassbender (Inglourious Basterds, X-Men: First Class). In Shame, Michael Fassbender plays Brandon, a young New York executive who escapes from his secure existence by seeking out sexual encounters. His routine is turned on its head by the unexpected arrival of his younger sister Sissy, an up-and-coming singer, played by Academy Award nominee Carey Mulligan (An Education, the upcoming The Great Gatsby).

The film continues in the visceral and intimate vein Steve McQueen established in Hunger, his 2008 directorial debut, while broadening its scope from just one central character to explore the challenges of contemporary human connections. After the critical success of Hunger, which won Steve McQueen the Caméra d'Or (first-time director) award when it premiered at Cannes, McQueen and Michael Fassbender were eager to work together once again. "Michael Fassbender is a genius, really," says Steve McQueen. "I want to work with the best actor there is, and I think he is, basically."

"It's sort of like letting go and getting rid of the safety net and free-falling."
"Working with Steve McQueen is kind of like stepping up to a cliff," says James Badge Dale, who plays the role of David, Brandon's philandering boss. "You can't see what's at the bottom of that cliff, and he says, just go, just jump, and you don't know what's going to happen. .... And Steve McQueen is jumping also, by taking a chance with you."

The opportunity to work with Steve McQueen and his cast inspired Carey Mulligan to pursue the role even before being approached. "When the script came along and I found out it was Steve McQueen and Michael Fassbender, I knew it was such a dream job," Carey Mulligan says of the duo. "I met with Steve McQueen for coffee in London and he basically kept trying to leave, and I had to keep stopping him and say, 'No no! You haven't given me the job yet!' I basically bossed him into giving me the role." The need to capture Sissy's emotional and unpredictable nature made new demands on Carey Mulligan as an actress, although this was the central reason for her passion to take it on.

Shame is the first film from See-Saw Films since the Academy Award winning The King's Speech. Producer Iain Canning notes that both Hunger and Shame share a preoccupation with the body. "Hunger was about a man who has no freedom; he uses his body to create the only freedom he can," Ian Canning says. "We're telling the opposite story in Shame-the story of a man who has every freedom, and yet he uses his body to create his own prison."

Co-writer Abi Morgan, an admirer of both Michael Fassbender and Carey Mulligan, says the chance to work with the pair on Shame was "a bit of a dream come true." "I knew that the two of them would be very exciting," she says. Abi Morgan recently wrote The Iron Lady, the biopic of British Prime Minister Margaret Thatcher featuring Meryl Streep in the title role.

On working in New York City, producer Emile Sherman notes, "It was a really exciting prospect for us as producers to be filming in New York. I've never made a film in New York before; I'm based in Sydney, Iain Iain Canning is based in London. [New York] is one of the greatest cities of world. We were just so welcomed by the filmmaking community there and we had a wonderful line producer and co-producer, Bergen Swanson. It's a great place to make movies and we'd love to make a film there again."