Mel Gibson Get the Gringo Synopsis: It's been a bad day for Driver (Mel Gibson) and it's not getting any better. He just made a big haul of millions that would give him a nice summer vacation on easy street. A good idea that went south - literally.

During a high-speed car chase with the US Border Patrol and with a bleeding body in his back seat, Driver flips his car smashing through the border wall, tumbling violently, coming to a stop … in Mexico. Apprehended by the Mexican authorities, he is sent to a hard-core prison where he enters the strange and dangerous world of 'El Pueblito'. Not an easy place for an outsider such as Driver to survive, unless it's with the help of someone who knows the ropes - like a 10 year old kid.

It was known as the worst prison in all of Mexico, referred to as 'la universidad del crimen' or the crime university - a nightmare of a place that symbolised violence, corruption and overcrowding. It was called 'El Pueblito', a society behind bars where inmates were in control, drugs were openly sold from stores within, and anyone could visit anytime - just as long as they paid off the guards.

Officially named el Centro de Readaptacion Social de la Mesa, El Pueblito was constructed in 1956 in Tijuana to accommodate 2,000 prisoners as a new experiment in corrections - one that went very wrong. Allowing families of those incarcerated to join them in prison and remain close to them would facilitate inmates' eventual readjustment to the outside world… or so it was thought. Wives, children, girlfriends, entire families would live inside the prison walls, some staying there full time while others came and went at will. Children headed off to school each morning, returning to El Pueblito again in the afternoon. Inside, couples were married; babies were born; old people died.

Alejandra Cuervo, a member of the Get the Gringo production team, was hired by the producers prior to the commencement of principal photography to do extensive research on El Pueblito, which also included talking with a number of its ex-inmates for first-hand experiences.

What Alejandra Cuervo discovered was that El Pueblito, meaning 'Little Town', was just that - a crowded shantytown with over 700 ramshackle homes and stores built around the prison's main courtyard. Shops sold almost anything and everything that was needed, and anything and anybody could be bought for a price.

In El Pueblito there were restaurants and food stands selling tacos, pizza, hamburgers and more, stores renting videos, pay phones, a barbershop, and lawyers and doctors working on the premises - themselves incarcerated for crimes committed. There was also a casa de cambio giving some of the best exchange rates in all of Tijuana; and a kiosk selling stolen goods - so popular, in fact, it attracted a stream of townspeople from outside the prison looking for bargains. Sports teams from outside would also come into El Pueblito to compete with inmate teams in football, basketball and volleyball.

El Pueblito's prison labs made their own crystal meth for sale both inside and out of the prison walls, and every kind of drug imaginable was openly sold including heroin, cocaine and marijuana. The drugs were all managed by mini cartels within El Pueblito, whose leaders lived a life of relative luxury within the prison walls, basically providing them with free reign to conduct their lucrative business. It was a world where only those prisoners with money and connections could enjoy a more privileged life while other inmates lived in fear and squalor, sleeping in crowded areas and out in the open, and suffering from hunger and other deprivations.

Money was power in El Pueblito. It bought anything and everything especially protection from the violent world within - and from the prison authorities. Being a career criminal took on a whole new meaning with professional inmates committing crimes both inside and out, and being able to retreat back into their protected world of El Pueblito.

The rich and powerful criminal elite of El Pueblito were called 'Maizerones' meaning 'pigs who eat corn'. And they had their own personal security squad - forces armed to the hilt with all sorts of weapons, from 38's to Uzis. The Maizerones and their security ruled and controlled the prison including the 400 or so prison guards who took bribery to an art form. Everyone had to pay off the guards to have things happen or not happen in El Pueblito, to look the other way in the trafficking of arms and drugs, or for bringing in a new refrigerator or Jacuzzi for the Maizerones duplex homes within. 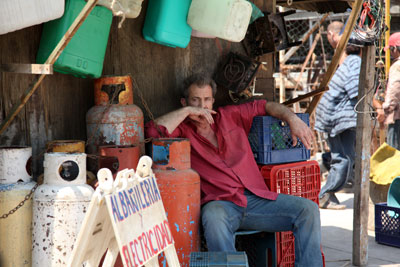 On August 20, 2002, in the wee hours of the morning, over 2,000 units from the Mexican Army laid siege to El Pueblito clearing out the prisoners and relocating them to the new el Hongo facility. In a few tumultuous hours, El Pueblito became no more. At the time of the siege, there were about 80 U.S. citizen inmates and 600 women, children and other family members living among the nearly 6,000 prisoners - many of those prisoners being organised crime leaders and some of the most dangerous criminals in the Mexican prison system.

Two months were spent filming Get the Gringo in the city of Veracruz, primarily in the shuttered Ignacio Allende Penitentiary which served as the setting for El Pueblito. This was the second time Mel Gibson and his company Icon Productions filmed on location in Veracruz, the first time being 2006 when Mel Gibson directed 'Apocalypto'.

It was the assignment of Production Designer Bernardo Trujillo to create the realistic sets that would take on the world of El Pueblito inside the Ignacio Allende Penitentiary. And with the creative vision and tireless work of Art Director Jay Aroesty, and Set Decorator Julietta Alvarez, they re-created an astonishingly real world of El Pueblito.

"El Pueblito was a very chaotic place built out of the inspiration and money of the inmates without regulations imposed upon them by the administration inside the prison," said Production Designer Bernardo Trujillo. "There was a lot of corruption and also a lot of spontaneity going on there" he continues.

The biggest challenge of the Art Department was to create a set for the movie that came from the sort of chaotic mixture of materials, architecture and makeshift structures and homes that the inmates built from their own ideas and manpower in the real El Pueblito. "This created a very specific aesthetic that was not organised at all - and we started with a very organised canvas here at the Allende prison", says Mr. Trujillo. "Fortunately we had the freedom to tear down walls, to take over empty spaces and to create empty spaces. The construction, art and set dressing departments created every detail that you see" said Mr. Trujillo.

"How would the people and the production design blend together in a believable way without creating such a chaos that the audience would be too distracted" he continued. "It's a thin line between becoming too stylised and becoming too realistic. You have the find the right spot in the middle. We all saw a very sweaty, a very colourless space even though colour is there - there's a hint of colour everywhere but it's sort of faded away. And it's allowed in certain items but only in little details but not in the overall look of the walls or the wardrobe. And in reality we're stretching it a little bit because in reality someone could wear a fluorescent color t-shirt and still be in jail but we decided to stay away from those colours; I think it's too distracting for the audience. We pretty much narrowed it down to a small color palette and started working with those limited colours to try to create chaos out of that. And I think that's more interesting."

"And there was humor everywhere in the prison", reflected Mr. Trujillo. "All the research we've done - from Mexican prisons to Latin American prisons to African prisons - one of the things that was repeated over and over was exactly that, how people find humor in every situation and how people find beauty in the hardest situations that you can imagine. And in a way, the Third World is very similar whether you're in Africa or in Indonesia or Central America or in Mexico - there are so many similarities, especially like in jails, in jail life, in what people ending up doing trying to lead a normal life even in those conditions is actually beautiful. They find a way to make their monotonous life not so monotonous and beautiful and colourful."

After shooting in the prison, the production then moved to the town of Perote, 90 minutes outside of Puebla and half-way between Veracruz and Mexico City. Salado, a dry lake bed just on the borderline of Perote, was the isolated and barren setting for the high speed car chase and heart-pounding crash through the US-Mexico border wall.