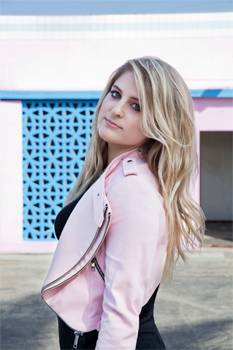 The four-track digital EP will include -All About That Bass' plus three brand-new tracks, -Title,' -Dear Future Husband' and -Close Your Eyes.' As fans eagerly await its release, they can create and share their own Bass Magazine covers as seen in the -All About That Bass' video by visiting the newly launched site allaboutthatbass.com.

Meghan will be headed to Australia for a promotional visit from September 11th – 16th. Whilst here, she will making a very special appearance on X Factor performing -All About That Bass'.

Widely hailed as a top contender for 2014's song of the summer, -All About That Bass' has shot straight to No. 1 on iTunes' and Amazon's digital singles charts, No. 1 on Billboard's Digital Songs chart and No. 5 on Billboard's Hot 100 chart in the USA. In Australia, -All About That Bass' is at #1 on the ARIA Single chart for the second week running, has been certified platinum and has been one of the most added songs at CHR radio.

Indeed, -All About That Bass' is poised to become a worldwide hit, peaking solidly at No. 1 in Canada and New Zealand. The rest of the world is catching up fast as -All About That Bass' reaches No. 10, Top 20 and Top 30 positions in Sweden, Norway, Finland, Switzerland, Poland, South Africa and a number of Asia markets.

The video has racked up more than 14 million views since premiering on influential pop blog Idolator two months ago and is the No. 1 selling video on the iTunes video chart.  The clip is directed by legendary director/producer/choreographer Fatima Robinson (Black Eyed Peas, Rihanna, Michael Jackson) and stars Vine superstar Sione Maraschino who has over 420,000 followers. You can see it here: http://smarturl.it/AATBvideo.

Meghan performed -All About That Bass' for the first time on US TV last week on 'Live With Kelly & Michael." She also appeared on NBC's 'Today" in an interview with host Savannah Guthrie just after the single was released in early July and appeared on BET's '106 & Park" last week. She's been named an MTVu Freshman, a Fuse Favorite for the month of August.

Meghan Trainor is a 20-year-old singer-songwriter/multi-instrumentalist from Nantucket who scored her first publishing deal at age 18. She's since penned tracks for everyone from Grammy-winning country superstars Rascal Flatts to reggae/rock/R&B group Common Kings. Inspired by everything from pop to R&B and soul to the melody and swing of soca, Meghan comes with her own unique, bold and catchy sound that also blends '50s throw back, hip-hop and classic pop. -All About That Bass' is the first single from Meghan Trainor's upcoming Epic Records full-length debut album to be released later this year.

Go behind the scenes with Meghan Trainor on the set of her new video for 'Dear Future Husband"! Watch Here