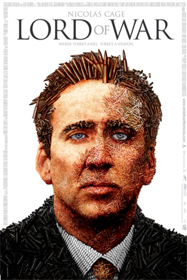 He Sells Guns... And He's Making A Killing.

Synopsis:
'Lord Of War' is an action adventure story set in the world of international arms dealing.

The film, based on fact, follows the globetrotting exploits of arms dealer Yuri Orlov (Nicolas Cage). Through some of the deadliest war zones, Yuri struggles to stay one step ahead of a relentless Interpol agent (Ethan Hawke), his business rivals, even some of his customers who include many of the world's most notorious dictators.

Finally, Yuri must also face his own conscience

My Verdict:
Yuri Orlov (Nicolas Cage) was born in the Ukraine but settled with his parents and younger brother, Vitaly (Jared Leto) in Brooklyn in the 1970's. The disillusioned Yuri yearns for something bigger and better than working in his parent's humble restaurant and before long he is a fledgling arms dealer. With his brother sometimes along for the ride, Yuri soon progresses and learns the ropes in becoming a fully-fledged arms dealer, taking on all nations seemingly without conscience. He declares he is just a businessman and soon learns all the loopholes needed to pull off his pursuit, whilst dealing with the biggest and often most corrupt leaders of so many nations around the globe.

But Yuri's life takes turns he doesn't anticipate. His beloved brother Vitaly soon becomes a drug-addict, he pursues a beautiful model, Ava Cordova (Bridget Moynahan), marries her and they have a son, and he is constantly being pursued by an Interpol agent Jack Valentine (Ethan Hawke). Over time, Yuri's life will come to haunt him in ways he could never imagine with the threat of losing those he loves most.

Nicolas Cage narrates 'The Lord Of War' in his inimitable style of straightforward honesty and frankness and this is one of the strongest elements and most enjoyable of the movie (it also helps as he fills in the gaps along the way). Having the gift of being able to talk around any situation is what helps his character accomplish his goal and Cage gives a powerful and convincing performance. He has the physical stature to match his clients, and always appears confident even if he hides insecurity and fear.

Cage's character develops over the course of the movie and we see him evolve into someone who does have feelings and emotions that belie what he does for a living. It is this development that is satisfying, along with his ability to maintain the character, even though it plays out as an episodic history of Yuri's life rather than a continuing sequence.

Jared Leto as Vitaly, who struggles to deal with inability to accept Yuri and his life, gives strong support and in a small but pivotal role, Ian Holm proves yet again that sometimes less is more, as he can say so much with just a look. Ethan Hawke manages to portray the frustrated Jack Valentine with ease and never looks challenged, as does Bridget Moynahan as Yuri's wife.

'Lord Of War' is a giant can of worms that can be ignored or used to open the eyes to the real issue of arms-dealers and gunrunners as some of the events are based on true incidents and therefore may be distressing to some. The reality of the situation is thought provoking enough to linger after the credits roll. And yes, there are hundreds of guns, actually, make that thousands!

Backed by some classic rock songs, 'Lord Of War' is an eye-opening movie if nothing else. It is entertaining, insightful and sometimes violent yet not overtly sadistic or cruel and certainly shows Nicolas Cage at his best.