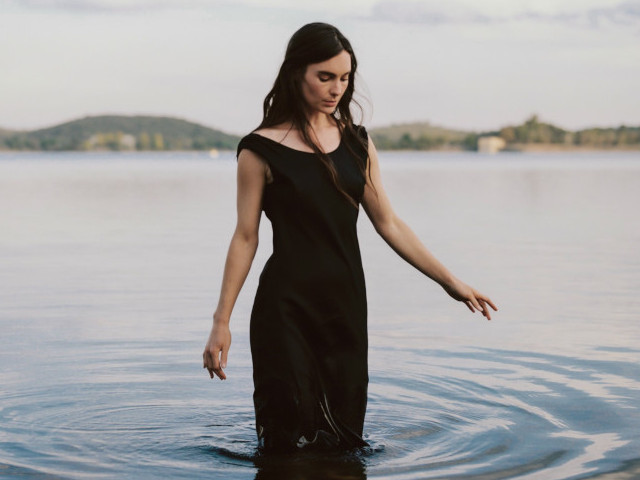 
The album is a glorious and heartrending tribute to what it means to be alive and learning in the world, having been old enough to feel its bruises and heartbreaks, but also be at the beginning of understanding our own individual insignificance within it. Accompanied by her beguiling melodies and hushed tones, the lyrics within the album are deeply introspective and impactful, written in the thick of the first year of a global pandemic that forced everyone's lives and spheres to become very small and very still.

Mitchell is finding ground in her natural progression, however remaining faithful to the fundamental sonics tied to her honored style.

Speaking on A Place to Fall Apart, "This album is a place to fall apart in. Take this patchwork blanket of melancholic love stories between the human and beyond-human and pitch it as a tent, either inside your lounge room or out in the bush. Lie down and look up at the stories. There is someone watching fruit slowly ripen on a tree. There is a girl becoming a river. and another person who is falling in love and turning blue. There is a strange and beautiful noise from far away ancestral lands. a woman is relaxing in a bathtub somewhere in suburbia. There is a word in the English language that is not needed in the Noongar language. two women sing to a Wollemi pine, summoning their inner knowing. There is wrestling with ideas of identity and belonging, of tradition and innovation. There is a deep, cold, wide river with two names. The women are singing again and asking the spirits of the land to help them with this modern mess. There is a girl in her happy place, sitting in an old apricot tree, alone but not lonely. she eats the sweet fruit, it is warm from the sun."

After six years between albums, the shift from ingenue to powerful truth teller and weaver of magic is complete. On A Place to Fall Apart, you follow the intrepid journey of Lisa's own unravelling. To unravel a thing doesn't mean to destroy it or even to separate it into a million pieces. An unravelled object becomes a singular piece, stripped bare of the artificial shape and form it held before. Unravelling is the precursor to rebuilding, a transition that can and should be done intentionally. In this album, the listener can hear Mitchell's attempts to be deliberate about her humanity and her choices.

Lisa has announced details of her new album A Place To Fall Apart along with the accompanying Album Launch Tour starting Friday, May 20 in Red Hill. A Place To Fall Apart is produced by Tom Iansek (Big Scary / #1Dads) and features previously released singles "I Believe In Kindness" and "Summoning" The album is available digitally and on vinyl.

Tickets for the A Place To Fall Apart Album Launch Tour with Lisa's stunning five-piece band are on sale now.