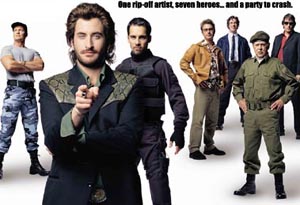 FEMAIL gives you a sneak peek as we take a look at one of this year's funniest new Australian films - "Let's Get Skase".

After the collapse of his massive Qintex business empire, Christopher Skase flees to the Spanish Island of Majorca, leaving angry creditors high and dry. Enter PETER DELLASANDRO, a fast-talking con man and failed entrepreneur who sees the "Chase For Skase" as a potential gold mine.

Dellasandro convinces the Creditors Board that he's the only man with the ability - and recklessness - to undertake the task demanded by his country: the kidnapping of Christopher Skase.

But not everyone is convinced - especially DANNY DAMATO, the fiery son of the Creditors chairman. Suspicious of Dellasandro, the two form an uneasy alliance as Dellasandro sets out to recruit the egocentric TV host ERIC CARNEY into his scheme - until seasoned mercenary MITCH VENDIEKS warns Dellasandro that Carney is planning a kidnap plot of his own.

Determined to beat Carney to the punch, Dellasandro and Danny join forces with Mitch to form their own team, recruiting the inept SEAN KNIGHT, mendacious getaway driver DAVE PHIBBS, and cynical intelligence ace RUPERT WINGATE - who soon discovers that Skase is devising a deadly scheme to resurrect his business empire across Europe!

With time running out, Dellasandro and the boys head for Majorca and track Skase to his sprawling mansion, confronting the devious businessman in a triumphant, hilarious, and action packed conclusion.