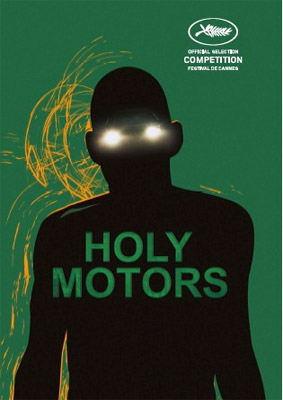 Synopsis: From dawn to after nightfall, a few hours in the life of Monsieur Oscar, a shadowy character who journeys from one life to the next. He is, in turn, captain of industry, assassin, beggar, monster, family man... He seems to be playing roles, plunging headlong into each part... but where are the cameras?

Monsieur Oscar is alone, accompanied only by Céline, the slender blonde woman behind the wheel of the vast engine that transports him in and around Paris. He's like a conscientious assassin moving from hit to hit. In pursuit of the purely beautiful act, the mysterious driving force, the women and ghosts of past lives. But where is his true home, his family, his rest?

Question: You appear at the beginning of the film in a sort of prologue that is, more precisely and more literally, an overture. What gave you the idea of being physically on screen?

Leos Carax: I first had this image of a large, full cinema that is darkened for the film screening. But the members of the audience are completely frozen and their eyes seem to be shut. Are they asleep? Dead?

The cinema audience seen from front on - something no one ever sees (apart from in the extraordinary final shot of "The Crowd" by King Vidor). Then my friend Katia told me about one of Hoffman's tales. The hero discovers that his bedroom opens via a hidden door into an opera house. Just as in this sentence by Kafka, which could serve as a preamble to any creative act:
So I decided to begin the film with this sleeper who wakes up in the middle of the night and finds himself in his pajamas in a large cinema filled with ghosts. I instinctively called the man - the dreamer in the film - Leos Carax. And so I played him. 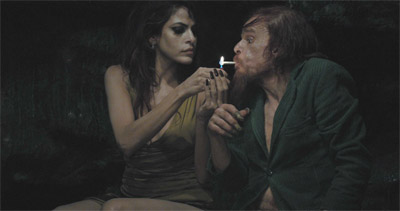 Question: What role did "Merde", your contribution to the film "Tokyo!", play in the conception of "Holy Motors", where the Merde character is one of Denis Lavant's avatars (if that's the right term)?

Leos Carax: "Holy Motors" was born of my incapacity to carry out several projects, all of them in another language and another country. They all ran into the same two obstacles: casting and cash. Fed up with not being able to film, I used "Merde", which had been commissioned in Japan, as inspiration. I commissioned myself to make a project under the same conditions, but in France - come up with an inexpensive film, quickly, for a pre-selected actor.

All of it made possible by digital cameras, which I despise (they are imposing themselves or being imposed on us), but which seem to reassure everyone.


Question: The idea of motors, motorization and the importance of machines is clearly expressed in the title and one of the underlying themes of the film. Was it the original idea behind the project or did it gradually take shape?

Leos Carax: There's never any initial idea or intention behind a film, but rather a couple of images and feelings that I splice together.

For "Holy Motors", one of the images I had in mind was of these stretch limousines that have appeared in the last few years. I first saw them in America and now every Sunday in my neighborhood in Paris for Chinese weddings. They're completely in tune with our times - both showy and tacky. They look good from the outside, but inside there's the same sad feeling as in a whores' hotel. They still touch me, though. They're outdated, like the old futurist toys of the past. I think they mark the end of an era, the era of large, visible machines.

These cars very soon became the heart of the film - its motor, if I may put it that way. I imagined them as long vessels carrying humans on their final journeys, their final assignments.

The film is therefore a form of science fiction, in which humans, beasts and machines are on the verge of extinction - "sacred motors" linked together by a common fate and solidarity, slaves to an increasingly virtual world. A world from which visible machines, real experiences and actions are gradually disappearing.


Question: Who is Monsieur Merde? Is he a ghost who has appeared from the past? Aworkmate?

Leos Carax: Monsieur Merde is fear and phobia. Childhood too. He's the great post-9/11 regression (terrorists who believe in tales of virgins in paradise, political leaders rejoicing that they can finally make the most of their full powers, like all-powerful kids. And dumbfounded people, like orphans in the dark).

Monsieur Merde is the extreme foreigner: the racist immigrant.


Question: Could Monsieur Oscar have been played by anyone other than Denis Lavant?

Leos Carax: If Denis had said no, I would have offered the part to Lon Chaney or to Chaplin. Or to Peter Lorre or Michel Simon.


Question: Which garage are humans put away in when they've reached the end of their day? Do they have somewhere comparable to the place at the end of the film?

Leos Carax: Where humans park for the night - what we call "home". But where is people's real home? Or is it better to live constantl on the move, as an explorer traveling over land and sea? But perhaps our real homes are, already, our computers?