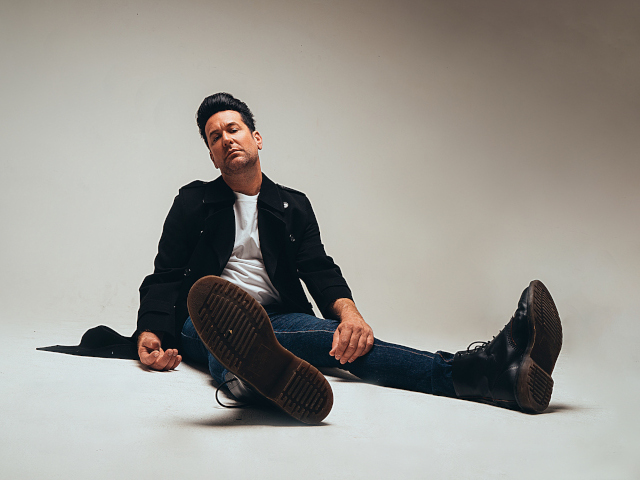 Two Aussie music legends collide in stirring fashion via Eskimo Joe frontman Kav Temperley's latest solo outing, with Kav teaming up with Little Birdy's very own Katy Steele for the charming new single Graduation Day. Releasing today alongside an equally blissful accompanying music video, Graduation Day is a sparkling addition to Kav's impending new solo album Machines of Love & Grace which is set for release in September. And new music isn't the only surprise for fans in 2022, with Kav also revealing part one of a huge regional Australian tour kicking off in Exmouth, before hitting Bendigo, Tallarook, Warrnambool, Newcastle, Gosford, Illawarra and Canberra.

Graduation Day kicks off with humid percussion and glistening melodics before dovetailing into a calm and creamy ode to small town love and Kav's
very own real-life graduation day traditions growing up in Fremantle, Perth. Co-written by long-time friends Kav and Katy and recorded at Kav's studio in Fremantle and at Sundown Studios, Graduation Day also boasts Lee Jones and Sacha Seaboune on guitar and Elliot Smith on drums, culminating in a fresh and endearingly intimate ode to rites of passage and connectivity, as Kav explains, "Growing up in Fremantle, it used to be a right of passage to jump off the old traffic bridge into the river on graduation day. People would pull over their cars and yell at you for being reckless and dangerous. The song Graduation Day is the story about someone who stayed behind and somebody who chose to leave, and about how no matter how far you go - there is always this tether pulling you back".

Bringing together two of Australia's most recognisable vocalists, Graduation Day not only helped Kav spark inspiration following two years of ongoing isolation; it also offered a chance for Kav and Katy to professionally reconnect years after their own intertwining formative musical moments, as Kav elaborates, "Myself and Katy have been friends for many, many years. Katy did her first Little Birdy demos in the back shed of my old house while Eskimo Joe were writing our second album A Song Is A City. We almost asked Katy to join Eskies playing keyboards, but Little Birdy was such a great musical project that it would have been criminal if she didn't get out there and become the musical goddess that we all new she was destined to become. After two years of such extreme isolation, it was an absolute pleasure to get in a room together and work on some new music. You never know if the magic is going to happen when you sit down to write a song with someone, but Graduation Day just felt right straight away". Echoing Kav's sentiments, Katy shares, "Kav is such a great writer and musician and I've always had a tonne of respect for him. This song showcases what a great writer he is so I am truly honoured to be on it! We've been hanging out a little recently working on stuff and Kav played me the song in the studio. I guess we share a slight affinity both being the 'lead singers' doing solo stuff and all the feelings, pressures and emotions that come with it. It's been so nice sharing those feelings together, it's made me feel less alone".

Fittingly complementing the real-world connection to Kav's own graduation day memories, the music video for Graduation Day features Kav's hometown in Fremantle, with Kav on directing and editing duties alongside Fremantle filmmakers Joseph London and Luna Laure. Drumming up the small town vibes with genuine hits of nostalgia, the music video is as much a love letter to Kav's youth as it is a vivid gateway to tangible and universal reminiscence and small town life, as Kav reveals, "The video for Graduation Day tells the story of what it means to live in a small town. It's a snapshot of Freo, with beautiful footage of the port town by Joseph London and performances shot by Luna Laure. Graduation Day is a look back at the sliding door moments of our lives where everything seemed hopeful and possible, and it features the old Fremantle traffic bridge that we used jump off as a right of passage on graduation day".

Founding the ARIA award-winning, four-times platinum band Eskimo Joe at the tender age of 19, Kav evolved from winning a band competition into a legacy-shaping musicial powerhouse as the frontman, bass player and songwriter for the beloved Aussie group. With their breakout single Black Fingernails, Red Wine releasing in 2006, and subsequently spending 62 weeks in the Top 50, Kav went on to write and record seven studio albums with Eskimo Joe.

As a solo artist, Kav is now poised to release a brand new album this September, Machines of Love & Grace, which shares its name not only with Kav's most recent single prior to Graduation Day, but also with the theory that humans are outliers on the planet – a virus upon it, putting hefty emphasis on love and empathy; ideals which don't really exist in the animal kingdom. We are, in effect, machines of love and grace.

Alongside Kav's extensive career fronting Eskimo Joe, he's also a seasoned performer both onstage and onscreen, having toured nationally and internationally in Asia, America and Europe, while also continuing to blaze trails in the music industry as an expert and mentor in creativity and songwriting. And while the impending release of new solo material has already sparked excitement into the latter half of 2022, fans will also be able to catch Kav live in action later this year on his freshly-announced multi-stop regional Australian tour. Armed with brand new material as well as a look into some favourite songs before they were famous, these regional shows will be a beautiful celebration of Kav's personal and professional experiences over the past few years and beyond, as Kav enthuses, "I'm looking forward to going everywhere as it's been a good 3 years since we've been able to tour the country. The shows will feature songs from my last two solo albums as well as a look at how some of the biggest Eskimo Joe songs sounded when I wrote them before they became the familiar radio hits everyone has come to know".

An APRA, WAM and OceanFloor Music ambassador currently in his seventh year of running creative workshops, 2022 ultimately finds Kav creatively potent and primed to share incredible musical collaborations as well as intimate and reflective material, with Machines of Love & Grace set to offer a snapshot of and a springboard for collective storytelling, as Kav concludes, "Machines of Love & Grace will be released in September this year and it features a whole bunch of fantastic collaborations, and documents the two and a half years of the pandemic.This will not be a list of what happened over the past two years but hopefully act as a mirror for everyone to get their own stories from."

Machines Of Love And Grace is set for release in September 2022.

Tickets to the Australian regional tour are onsale now from www.kavtemperley.com.au.