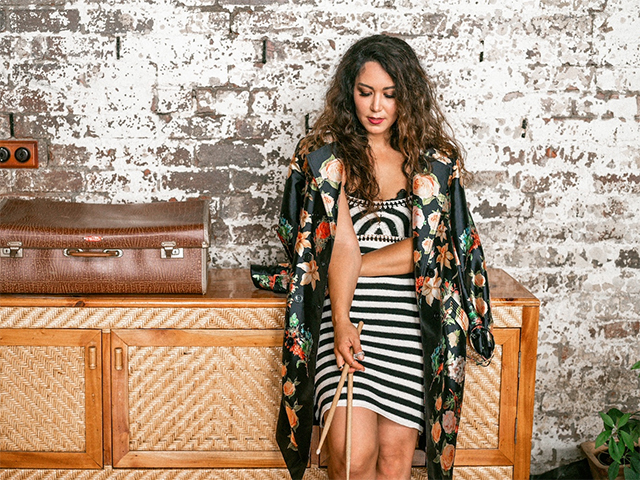 Beats, grooves and husky delights lie in wait on the debut single Let It Go from dynamic drummer and songwriter Kat Greta. Featuring Melbourne's Charlie Lane on vocals, Let It Go marks a rousing first look into Kat's impending maiden EP Get Up & Go due out on Friday August 5; and the slick flavours of Let It Go can also be caught live in action in July and August, with Kat launching the single at The Old Bar in Fitzroy on Thursday July 21, and an EP live unveiling at The Workers Club in Fitzroy on Sunday August 28, with the EP available to grab on vinyl on the night.

Let It Go dazzles with modern 80s cool, with gleaming keys, driving beats and frolicking melodics barreling around the whiskey-soaked vocal stylings of Charlie Lane and Kat's potent drumwork throughout. Equally embracing vintage and modern tones in a sharp and simplistic arrangement, Let It Go fluidly embraces nods to the likes of 80s greats like The Doors and INXS, alongside the melodic approaches of Carole King, The Beatles and Billy Joel. But while this modern-vintage hybrid has itself been years in the making, Kat also struck inspiration for Let It Go in seizing the day professionally and personally for her debut release, as she explains, "Let It Go is about letting go of what isn't serving you well, and finding the courage to be free. Life is short. In this case for me, it was rediscovering the joy that playing the drums brings me. I had a gut feeling that there was a suppressed dream inside of me, and I just needed to take a leap of faith and find the courage to do it. Also, on a very personal note, my parents are both living with degenerative illnesses and it really brings home for me the notion that life is very short."

The video for Let It Go perfectly complements the vintage flavours and lyrical themes on display in the track, with Kat roadtripping in a Mustang convertible with her hair in the wind and, most essentially, with her drum kit along for the ride. Teaming up with Dayne Edward on the clip, who has previously worked with Maya Vice, Zretro, Tanha MC, Adidas and Tune Squad, the end result is a quintessential road trip adventure around areas close to Kat's heart, as she elaborates, "We decided that I'd drive an old car in the video, something a bit vintage to suit the song. We went with a Mustang because Mustangs are like the ultimate symbol for freedom. I would drive it down an open road, roof down, hair blowing in the breeze, with my drums in the back. Then I find myself at the ocean beach down at Portsea, playing drums out in the open air at London Bridge. It's really quite liberating. It represents my dream of being free and playing the drums. We chose the location of Cape Schanck and the surrounding areas down on the Peninsula with the lighthouse track, and got a drone to really capture the beauty of the area with the windy track and crashing waves. Also, the Mornington Peninsula is where I grew up and still live, so I'm quite attached to the area."

While Let It Go, and her upcoming EP Get Up & Go, may mark Kat's first official foray into the musical realm as an artist, her own backstory is lined with plenty of Aussie music royalty. Hailing from a big Italian, musical family, Kat's own immersion into music comes as little surprise, with this Victorian powerhouse related to Nic and Chris Cester of Jet, Eugene Cester from TISM, Alf, Johnny, Jayney and Lydia Klimek and opera singer Christina Russo. With plenty of new material and live shows on the horizon, Kat has spent a lifetime around music, playing from an early age and being surrounded by various musical instruments growing up. And with 2022 culminating in Kat finally launching her solo project, this is only just the beginning for this compelling artist; and it's a journey Kat is entirely ready for, as she concludes, "I am super excited to be releasing a new single and EP this year. It's been a few years in the making and it's been an incredible journey so far. It took me a really long time to work out my sound and style, and I did this in a backwards way – I made the recording before I got the band together. I've learnt a lot in the process. I am happy to be able to release my music with the confidence that this is the kind of artist that I am."

Let It Go is out today, Thursday July 7.

Get Up & Go is set for release on Friday August 5, available on vinyl.

Get Up & Go EP launch with guests Thomas Byrne & Hui

How does drumming at the forefront of a song change the music ?

Kat Greta: I think the drums are a really theatrical instrument - they are so much fun to play! Sure, the drums definitely keep the band playing in time - but when they are highlighted, I think they bring a whole different energy to the music.

What inspired your new single Let it Go?

Kat Greta: Seeing my mum and dad's health decline has been really hard to witness. I am so grateful now to have my health, and I can't help but feel a sense of urgency to live my dreams while I still can. "Let It Go" is about just that - living your dreams, and of letting go of anything that is holding you back from doing that.

Who have been your musical influences?

Kat Greta: I just LOVE older music (from the 60's, 70's and 80's.) I am always drawn to a song's melody, so I admire artists like Brian Wilson, Carole King, Billy Joel and Kate Bush (to name a few). Also, I'm a huge John Bonham fan, because he had such a flair on stage, and was just an absolute pro.

What motivates you most when writing music?

Kat Greta: I know it probably sounds cliche', but it's my family. I want to show my kids (Miss 5 and Mr. 2) that anything is possible. There is no dream that is too far-fetched.

What are some of the challenges you have faced in the music industry?

Kat Greta: As an independent artist, I had NO idea what I was doing (and still don't really, haha) apart from making music, so there is a lot to learn. I make mistakes every day! The main challenges were finding gigs and finding the money to fund the project. It's definitely not been easy.

Kat Greta: Lots of drumming, performing and writing! I'd love to make it out to the other states, and a full-length album is also on the cards.

Kat Greta: Oh of course :) Thanks for the chat!