Synopsis: Academy Award®-winner Marion Cotillard (La Vie en Rose) is Sandra, a married woman with two children who plans to return to her factory job after a breakdown. However she's told that she is to be made redundant, while her co-workers will receive a bonus. In order to help her, Sandra's best friend at work has convinced their boss to hold a vote – do the workers want to save Sandra's job, or keep their bonus? It is Friday and the vote will be held on Monday – Sandra has the weekend to persuade her workmates to keep her employed, or to sacrifice their bonus they need to make ends meet.

Written and directed by two-time Palme d'Or-winning filmmakers, Jean-Pierre and Luc Dardenne, and with a commanding performance by Marion Cotillard, Two Days, One Night is an emotionally resonant drama.

Interview with Jean-Pierre and Luc Dardenne

Question: Please tell us about the circumstances that lead to Two Days, One Night?

Luc Dardenne: For years we've been considering a film about someone who is made redundant following the vote of her colleagues who - like their boss - think she isn't performing efficiently, and hold her responsible for the loss of their bonuses. Two Days, One Night was really born once we came up with Sandra and Manu, a couple united in the face of adversity.

Jean-Pierre Dardenne: What was important for us was to show someone excluded because she is considered weak, because she doesn't perform well enough. The film praises this 'non-performing" character who finds strength and courage through the fight she conducts with her husband. 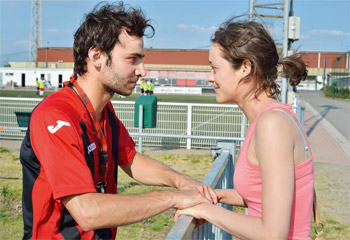 Question: Sandra's colleagues voted for a staff reduction and her redundancy in exchange for a bonus. Have you come across similar real-life stories?

Jean-Pierre Dardenne: Yes, more than once, even if not exactly the same. You see the general context of the film - the obsession with performance and violent competition between workers - everywhere in the workplace, in Belgium and elsewhere.


Question: Manu encourages Sandra to meet with her colleagues over the course of a weekend, to ask them to re-consider their vote so she can get her job back. His role is crucial.

Jean-Pierre Dardenne: Manu is a bit like a union leader, Sandra's coach. He manages to convince her that there's a possibility, that she's capable of convincing her colleagues to change their minds.

Luc Dardenne: Sandra shouldn't appear like a victim condemning her colleagues who have voted against her. This isn't the fight of some poor girl against a bunch of bastards!


Question: You don't judge any of your characters.

Luc Dardenne: The workers in Two Days, One Night are placed in a position of relentless competition and rivalry. There are no good guys versus bad guys here. In any case, we're not interested in looking at the world like that.

Jean-Pierre Dardenne: A film isn't a tribunal. All of Sandra's colleagues have good reasons for saying yes or no to her. One thing is for sure: this bonus isn't a luxury for any of them. They all need the money to pay their rent, their bills… Sandra understands only too well, as she is struggling with financial difficulties herself.


Question: Sandra, her husband and their children are a close-knit family: this hasn't always been the case in your films.

Luc Dardenne: Sandra draws her courage from her relationship with her husband. Manu loves his wife deeply, he fights against her depression and helps her to stop being afraid. At the beginning of the film he believes in Sandra more than she does herself.

Jean-Pierre Dardenne: Even their children get involved. They help their parents to find out where her co-workers live.


Question: These colleagues never envisage going on strike or fighting against the deal their boss is proposing.

Jean-Pierre Dardenne: We chose a small firm with too few workers to form a union. If the film were the story of a struggle against a defined enemy it would have been completely different… All the same, the absence of collective reaction, of any struggle against the principle behind that vote, reveals a very contemporary lack of solidarity.


Question: How long did it take you to complete the screenplay?

Jean-Pierre Dardenne: We've been talking about this subject for about ten years - we've had plenty of time to prepare ourselves.

Luc Dardenne: The script itself didn't take long. We started writing in October 2012 and finished in March 2013. We wanted the narrative to unfold over a very short period of time, as the title indicates.

Jean-Pierre Dardenne: The urgency dictated by this time frame had to be reflected in the rhythm of the film.


Question: After Cécile de France in The Kid With a Bike, you cast Marion Cotillard in Two Days, One Night.

Luc Dardenne: We met Marion when we were working as co-producers on Rust and Bone by Jacques Audiard, which was partly shot in Belgium. We met her by chance, coming out of an elevator holding her baby, and were won over immediately. Driving back to Liège, we didn't stop talking about her: her face, her look…

Jean-Pierre Dardenne: Hiring such a famous actress was an additional challenge for us. Marion was able to find a new body and a new face for this film.

Luc Dardenne: She never wanted to show her work as an actor. Nothing that she accomplishes here falls under the heading of a performance or display. We worked together in an atmosphere of reciprocal trust that allowed us to try anything.


Question: For Manu, you returned to Fabrizio Rongione, who has appeared in a number of your films.

Jean-Pierre Dardenne: Yes: Rosetta, The Child, The Silence of Lorna and The Kid With a Bike. We thought about him for the part of Manu right from the start. It was great to work with him again.

Luc Dardenne: In this film, his role is crucial as this is also Manu's story. Fabrizio succeeded in giving this man the life force and the enthusiasm necessary to support Sandra.


Question: You have also cast your perennial favourite, Olivier Gourmet.

Luc Dardenne: We hear a lot about his character throughout the film without ever seeing him, and then, at one point, like the wild boar of the Ardennes, there he is!


Question: How did you work with the actors?

Jean-Pierre Dardenne: We filmed rehearsals for a month. And before that, for two months, Luc and I prepared for the shoot on location, filming with our video camera.

Luc Dardenne: The rehearsal phase is necessary before shooting, to find the right rhythms and create a climate of total trust with the actors in order to be able to risk the simplest things.

Jean-Pierre Dardenne: We shot chronologically, which is as important for us as for the actors. Sandra's journey is as much a physical as a mental one, and it was essential for Marion, Fabrizio and also for the other actors to film it chronologically.

In James Gray's The Immigrant, Ewa Cybulski (Marion Cotillard) and her sister sail to New York from their native...

Marion Cotillard and Joseph Gordon-Levitt in The Dark Knight Rises

Marion Cotillard and Joseph Gordon-Levitt have been cast in Christopher Nolan's The Dark Knight Rises. Cotillard...