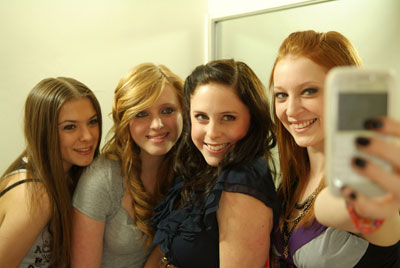 Synopsis: The DVD, called The Gathering, highlights a typical adolescent gathering which spirals out of control due to an over supply of alcohol and the arrival of gatecrashers. The hard hitting themes in the film include sexual assault, violence, glassing and alcoholic poisoning.

The 2008 National Drug Research Institute found that, on average, one in four hospitalisations of 15-25 year olds happen because of alcohol. In addition, four Australians under 25 die due to alcohol-related injuries in an average week.

Mayor Russell Aubrey said the script for The Gathering was written with the input of more than 150 teenagers who described the real and dangerous situations in which they find themselves.

"Teen binge drinking can and does lead to a number of horrifying situations. These can include car accidents, sexual assault, violent attacks, hospitalisation and even death," he said.
"This DVD resource is designed to engage young people in discussion and raise awareness about the harms associated with binge drinking. The resource depicts drunkenness as undesirable and discourages the secondary supply of alcohol to juveniles by parents, older siblings and friends."

The Gathering will be accompanied by resource material to assist teachers and facilitators in effectively engaging young people in discussion about strategies for staying safe when socialising.

Several years ago the City identified the need to target young people in alcohol education programs. The script developed for The Gathering was created after discussing typical events occurring at teenage parties.

The script was then workshopped with teenagers to ensure the credibility of the characters, scenario and language. The DVD will be provided to all senior schools in the City of Melville free of charge. Schools and organisations outside of the City of Melville will be able to purchase the DVD resource.

Additional funding for the project was sourced from Lotterywest, Healthway and the Cities of Rockingham and Perth. 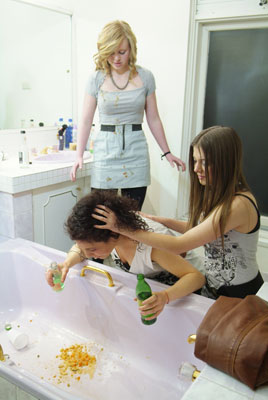 Janet Armarego is the Executive Producer of The Gathering. Janet is the Health and Wellbeing Officer of the City of Melville (in Perth) that came up with the idea for the film.

Question: What motivated you to make and be involved in the making of The Gathering?

Janet Armarego: We have local meetings with our local licensees, people from local hotels who have bottle shops and we had identified from an alcohol perspective at a local level that one of the major problems was teens binge-drinking. Our bottle shop owners would talk about the safe supply of alcohol from parents to teens and older siblings to teens. We are very aware that it is an issue and we had made a decision to look at an education strategy and based on the successes that we had with a DVD called 'Six Mates, Six Stories' that had been created four years ago, it seemed like a really good tool to engage young people in a discussion about alcohol and binge-drinking. What is really important when you're engaging young people is you reflect what it is they're doing; it was important that whatever we did, we weren't being judgmental we were saying 'this is what is going on, how about we talk about it and talk about decision making'. It had to be something that would engage young people but at the same time it wasn't judgmental and it enabled them to come up with their own strategies and examine the harms associated with binge drinking.


Question: Why do you think it's important that The Gathering be shown in Health and English classes, Australia wide?

Janet Armarego: It is probably the best fit in terms of curriculum and it is our feeling that possibly young people don't always relate to alcohol messages that are taught in schools because when it is dry and boring kids switch off to it. What we felt was needed was something that really lets young people know the seriousness of the problem but at the same time it gives them strategies to do something about it. We feel it is important for young people to view this because that way they're informed about some of the things that can go wrong and they also have an idea of the decisions they can make. It is really about giving them the wisdom of what can happen before they actually get into that place. In these situations it would be much better to not have to learn by experience, as you saw from The Gathering those experiences can be quite devastating.


Question: Why do you believe teenage drinking is on the rise?

Janet Armarego: A lot of evidence seems to suggest that with the increased availability of alcohol, you are going to get this. These days it is easy to get a hold of alcohol as there is a lot more places that supply it and young people now have access, with their part time jobs, to sufficient funds to buy alcohol. Unfortunately it is becoming more the 'norm'; what is also happening is the quantity of drinking seems to have escalated; I can remember back to when I was 13 and experimented with alcohol but not to the same level. We believe what is happening here is that there are a lot of young people making the decision to drink but they have no idea how dangerous it is. You hear a lot about drink spiking and how people believe they have had their drink spiked and that is why they passed out but a lot of it is pure ignorance about the quantities that are being drunk because they simply have no real understanding of the fact that if you're small in body size and you skull a quarter of a bottle of vodka, there are serious consequences.

Again, part of this resource is to engage people and simply teach them about how risky drinking can be and that you really have to look at your body size and what you might have eaten; there are a number of contributing factors to the way you may react to alcohol that you consume. The Gathering is a discretion tool for thinking about the type of thing because whilst we teach standard drinks in regards to drink driving, the young people that aren't driving are not going to relate to standard drinks at all; this is another way of highlighting the need to have a real think and monitor the amount that you're drinking. Generally I don't believe teenagers understand the severity of the consequences. One young person commented after a screening of The Gathering 'How did Jess die, at the end?' They didn't actually understand that drinking alcohol could cause a death.


Question: What can parents and teachers do to help open the lines of communication with teens on this topic?

Janet Armarego: I think they cannot be judgmental, they have to be generally interested in what young people have got to say and listen to what they have to say about the drinking culture, drinking situations, whether they are feeling pressured or if generally they do not understand how to drink safety. Whilst we're not meant to say this because you are not suppose to drink under 18, I think we have a responsibility to teach young people strategies to stay safe and not just say "you shouldn't be drinking and therefore I am not going to talk to you about it". I think we have to open the lines of communication and try and give them wisdom and hindsight so they don't come unstuck and get them to look after their mates; I think parents need to do exactly the same thing. Most parents would have experimented with alcohol as well and because of that you have to open the lines of communication and teach kids about strategies. Parents need to say "if you get in a bad situation, I need to know about it because I will come and pick you up". Young people need to know they can ring their parents because a lot of people make decisions based on fear and they generally try and cover up things because they think they're going to get in trouble.


Question: How common are the repercussions of drinking that are seen in The Gathering?

Janet Armarego: We include lots for a reason, we were trying to cram as much in as we could into The Gathering because all those elements might not happen, at one party, but we do know a lot of instances were young people do get hosptialised as a result of drinking. Some young people are smart enough to ring an ambulance and we want to emphasis that factor. We are not going to have all those things happen; but young people have said to us "we can relate to lots of these" such as the vibe, the gate-crashing and the fact that people are not monitoring their drinks. I have listened to some stories were people have lost bowel control and urinal control and we didn't show lots of things like that, that we could have also shown because there are more and more issues that can happen as a result of excessive alcohol consumption. We do acknowledge that there are a number of elements that can happen but we know that those all happen on a fairy regular basis; obviously the extreme is a young person dying. It is so easy to avoid these consequences; we need to hit home that it is that easy for these consequences to happen.

The statistics have risen since we made The Gathering; on average five Australians under 25 die from injuries caused by hazardous drinking in a week. It is shocking. Over the last ten years about 15% of all deaths among 15-24 year olds were due to risky or high risk drinking. It is staggering and later on not only do we have those injuries, young people can become reliant on alcohol and they will also have problems with alcohol dependency.


Question: What positive outcomes have you seen already from the screenings of The Gathering?

Janet Armarego: We have seen that The Gathering depicts drunkenness as undesirable so there is nothing glamourous about this because I think a lot of young people do think it is pretty cool to get drunk. Whereas we have shown it warts and all; if you are with a group of people and they have all had lots to drink and you've had lots to drink you're not seeing it for what it is and when you wake up with a hangover the next day, you have not experienced the horror, devastation and destruction of what actually went on the night before and you're probably not aware of the other issues particularly for example things like sexual assault; these things do happen on a regular basis.

If you go to www.melvillecity.com.au/thegathering there is a post from a mother about a party she had experienced and she made a comment that when she visited her GP they mentioned how many young women come into the surgery and they do not know whether they had sex the night before; that is pretty horrendous.

The Gathering has been really awareness raising with young people and parents because it motivates parents to talk to their children about it and at the same time we are trying to deglamorise drunkenness. We also want to teach young people that they really need to think about the choices they make before they go out, not when they're in the moment.