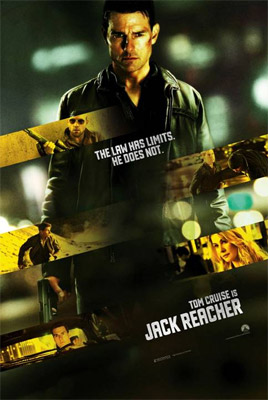 Verdict: 'Get Jack Reacher' that is the sole defence statement of a man accused of shooting and killing five innocents for apparently no reason. While the DA's office is trying to work out how to find the 'ghost' that is Jack Reacher, who should turn up in their offices but the man himself? But Reacher is there to dole out 'justice' to the accused sniper not to help him.... until he begins to investigate the evidence that makes this such a slam dunk of a case...

The story is totally Jack Reacher and the movie is fantastic! The humour and the intrigue and the action are everything you would expect of a story by Lee Child. It is an edge of your seat, roller coaster ride that makes you think and makes you laugh. Robert Duvall is probably my favourite character as Cash... a wily old ex-soldier that gets roped into helping Reacher save the girl and bring the bad guys to justice.

I highly recommend this as a stand-alone movie and I look forward to seeing it again but I don't suggest that die hard Reacher fans go to see it as a Reacher movie.
- Juliea Bolton