Reese Witherspoon How Do You Know How Do You Know

Synopsis: From James L. Brooks, the Academy Award®-winning director of such memorable classics as Broadcast News, Terms of Endearment and As Good As It Gets, comes How Do You Know. How Do You Know focuses on a love triangle between George (Paul Rudd), a white collar exec and Matty (Owen Wilson), a professional baseball player who both find themselves smitten with Lisa (Reese Witherspoon). 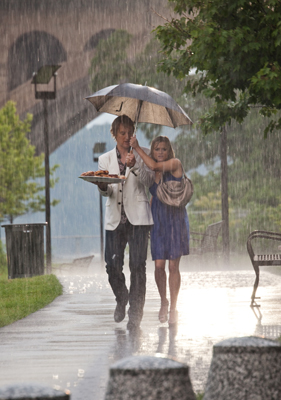 "Jim is the most amazing observer of life," says Laurence Mark, producer of How Do You Know. "He's a terrific listener and a keen observer, and that manifests itself in his characters. It's why they have such depth, are so interesting, and have such fascinating things to say."

"His voice is unique," says producer Julie Ansell, who has been Brooks' producing partner for 20 years. "He has insights into people - when he writes something that touches on something you've experienced in your own life, you think, 'That's it - I couldn't have put it into words, but that's how I felt.' It hits you deep inside."

"He writes about real people, real dilemmas they face," says producer Paula Weinstein. "His characters are complicated, difficult, confused, human, flawed, funny, and true. Watching his movies is like reading a great novel that you don't want to end - you just want to stay in their world a little while more."

"No one writes dialogue the way he does," Julie Ansell continues. "He wants to get into his characters so deeply that sometimes we spend two years doing research, talking to hundreds of people for each character."

"Jim gets an idea for his characters, then he wants to find out what's real, what's true," says Paula Weinstein.

It's said that the details are what sells a story: we can feel characters are real if we believe the small, fine aspects of their behavior. "All we have in movies is detail," says Reese Witherspoon. "Detail is what makes a movie funny, it's what makes it real, what makes it authentic. It's why you invest in the characters. Details from the amount of money people make, how much they travel and how they travel, who their closest friends are, what kind of people they date, what they eat and don't eat. All of that informs your character and the story."

Brooks becomes fascinated by those details. "When he was doing research for Lisa's apartment, he went to real athletes' apartments," says Laurence Mark. "Jim saw a trophy case - it wasn't too fancy, but it showed how proud the person was to have won those trophies. Jim hangs on to details like that, and it's how his research pays off."

Even the smallest details get researched. For example, there is a special drink that Paul Rudd's character, George, makes for Lisa. Jim turned to his friend, three-star Michelin chef of The French Laundry, and Keller really put his mind to it. He invented a brilliant drink for the movie.

Into the shaker, put:
1 sugar cube
3 dashes of bitters
1.5 oz of Makers Mark

Pour into a Martini glass or over ice. Finish with a beautiful orange peel. 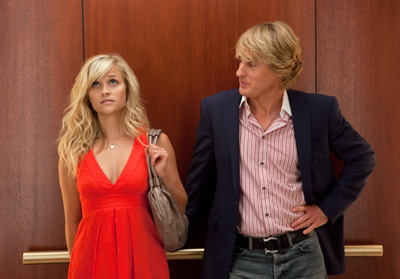 The actors also got into the research act. Even though Reese Witherspoon would appear playing ball for only a few moments in the final film, Reese Witherspoon trained with legendary UCLA women's softball coach Sue Enquist for months. "I'd work with her three days a week for two or three hours, just working on basic skills like throwing, catching, batting, posture, stuff like that. But there was also a different aspect of it - it was a study of a completely different kind of person. I'd never really known many athletes in my life, so jumping into their world and learning how they wake up, what their day is like, how much they work out, how much of a personal life they have, what their college experience was like, really informed my character. Their relationships with their teammates are paramount in their lives."

Reese Witherspoon also trained with the USA Women's softball team. "I got to meet almost all of them and work and train with some of them. It was an incredible, awe-inspiring experience - they have an incredible athleticism, professionalism, drive, and focus that was really inspiring."

The film is set in Washington, DC, and the production filmed there and in Philadelphia. "Filming in DC has gotten easier, but it's still more complicated than most places," says DC production supervisor Carol Flaisher. "There can be four - or more - permitting agencies: the Park Service, Secret Service, Capitol Police, General Services Administration. It's not easy to close down anything here - for security reasons. But the tradeoff is that you get a unique and energetic city that becomes another character in the movie."

The production even got the chance to film at Nationals Park, the home of Major League Baseball's Washington Nationals, the team that Matty pitches for. With the big league club out of town, the production took over for scenes of Wilson talking with the other relief pitchers in the middle of a game, as well as a shot of an outfielder making a spectacular catch.

Four-time Academy Award®-nominated production designer Jeannine Oppewall was charged with creating the design of the film. "Design is an organic process," she says. "It starts with a feeling about a place and environment, and you make choices from there - you build the design out of a series of choices based on one or two strong feelings or ideas."

Working within the confines of a contemporary romantic comedy, Oppewall says, "I can't really differentiate between a look that's stylized and a look that's real. In this movie, there are characters who are definitely living in very real circumstances, whereas Jack Nicholson and Owen Wilson's characters are living in somewhat artificial circumstances, because they're surrounded by moneyed choices. The money they spend separates them from real life."

In fact, Matty and Charles live in the same building - an expensive one in an upscale part of town. "Matty has money and a modicum of taste. People with money can usually buy taste, and that's what we did with his place. He bought into a nice, expensive building, had somebody do it over. Charles has a smaller apartment - we essentially took Matty's apartment and chopped it down, adding walls to make it smaller."

One can compare to the apartment where Lisa lives. "Matty's apartment is large and hard-edged, while Lisa lives in a modest, residential neighborhood, in a much smaller apartment, but one with a lot of light and air and warm color."

Oppewall notes that as George's life falls apart, his descent is reflected in the design. "George starts off in a kind of a comfortable, upper-class, well-appointed bachelor pad, and ends up living above a cake store on a scruffy street corner, with his belongings piled up haphazardly."

Each of the characters has a different color scheme, not only to differentiate them from each other, but to underscore who they are. "Matty has a burnt orange in his hallway that sets the tone for almost everything else in the place; he likes things bright and lively. Lisa is in the purple family, reflecting the sun and warmth and light in her personality. George's place isn't particularly colorful at all - he's trying to figure out where he is in life."

Costume Designer Shay Cunliffe also describes the characters through her designs - and notes that the challenge is to do what is right for the characters without going too far. "Jim walks a tightrope between trying to mine some deeper area of emotion and getting what's funny out of a scene," she says. "Every department is trying at every moment to find that thing that makes him smile broadly but doesn't tip the balance into being too in-your-face.

Key to Brooks' filmmaking is that he insists every detail of the production enhance his storytelling. "With my department, wardrobe, it's extremely challenging to deal in that realm - especially with contemporary clothes, which you might think you could just run out and buy off the rack. Each change for Jim is tremendously important. Each beat of his movie is extremely considered. He feels deeply what the visual representation should be. So, it can become quite a test to find that simple dress that's the dress you fall in love with but which you also feel would be worn by the character who will be wearing it."