Dame Helen Mirren has come a long way since she bared more than her soul as an Australian girl who poses for painter James Mason in The Age of Consent. Now an Oscar winner for The Queen, Mirren, who has appeared in 100 film and TV shows, has been virtually rediscovered in the last few years. Now starring as the often-melodramatic wife of Leo Tolstoy in The Last Station, another Oscar nomination is a real possibility, following her recent Golden Globe nod. Mirren talked to Paul Fischer in this exclusive interview.


QUESTION: Now, I understand that one of the attractions for you to do Last Station was the fact that it had - within this passionate drama, a great sense of humor.

HELEN MIRREN: Yes. It does, it's funny. Most of all, it's funny. Without being gag-driven, or comedic in that sense. It's just very funny about real life. And that's the kind of comedy I always enjoy the most.


QUESTION: Could you identify at all with any facet of this character, or this marriage?

HELEN MIRREN: No, I mean, I'm so not like Sofya. I wish I was more like Sofya. Instead, I get quiet and resentful and cry and angry and sulk. You know, Sofya does not do that. She lets it all out immediately. And I wish I had more of her characteristics. I'm certainly not like her, in that sense. But I think that anybody who's married - of course, they're not confronted with the same kind of problems as Sofya and Tolstoy were at the end of their marriage. Those sort of massive problems. But every marriage goes through those moments of conflict and disagreement. Even quite fundamental disagreement. And - you know, you fight your way through it. One of the most wonderful lines in the film is when Tolstoy says to Sofya, you know, "Yes, I love you. But, why do you make it so hard?" And she says, "Of course it's hard. What do you expect?" She said, you know, "You are that - you're the work of my life. I'm the work of your life. That's what love is." And I think that's a wonderful description of love.


QUESTION: Is that the theme of this film? 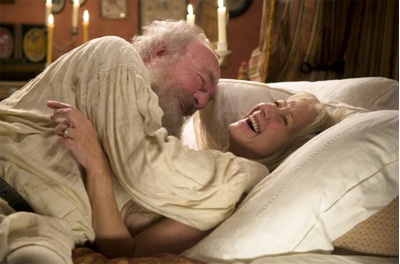 QUESTION: Now, is this it based on a particular event in Tolstoy's life?

HELEN MIRREN: It's very close to what happened. You know, in that era, period of their life, everyone was writing diaries. And Jay Parini, who wrote the book that the film script was written from, took all those diaries. And he did a very clever thing, which was - a sort of Rashomon type of thing, where you see the same incident from all these different points of view. Each of these people are writing their diaries. So it's based in a lot of truth. A lot of what happened. She did try to - you know, she did throw herself into the pond. She did smash the - she tried to - you know, took poison. He did finish up in the station. She did finish up in a train outside, that actually, she'd rented. And they wouldn't let her in to see her. There was this conflict about the estate. All of that was true, absolutely true. Sofya was that kind of person, who was that volcanic, emotional person. Tolstoy was fed up with it by then. So - Valentin existed, Masha existed, Bulgakov existed. All of that is absolutely true.


QUESTION: Did you find it necessary to immerse yourself in research? Or do you think it was pretty much there on the page?

HELEN MIRREN: I thought it was there on the page. I didn't feel the need to - sometimes research, funnily enough, can take you up the wrong alley, because the director, and indeed the writer of the book, this was their vision, if you like, and their interpretation of the facts. If I'd come along and said, "Oh, I don't see it like that. I think she would have done this, or I think that happened." I think it would have muddied the waters. At some point, you have to say, "Okay, this is your vision." And my job is to interpret it. And that's what I did.


QUESTION: You're in an extraordinary period in your life, where it seems that the older you get, the richer the role. And I'm wondering how surprised are you that at this time in your life - you're now an Oscar winner. The last time I spoke to you, you were not an Oscar winner. Are you kind of surprised by that? And how picky are you, in the kinds of films that you take on? 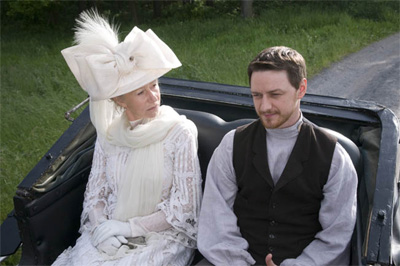 HELEN MIRREN: Not very picky. I mean, I am picky. But my reasons for picking things are somewhat random, and not very intellectual. It's like, who's it with? Is it different from what I've just done? Does it look like fun? All of those sorts of things. Sometimes - I mean, I just did Phedre in London at the National Theatre, for most of last year. I was doing theatre. That was a conscious decision. Time to do theatre. I'd done a lot of films back to back. It was time to do some theatre, and I did that. And all of those films that I did before Phedre are just about to come out. So it looks as if I've been working in nothing but movies. But that's not actually the case.


QUESTION: Now, when your husband comes up to you and says, "Look. I want you to play a brothel madam in the new movie I'm directing, Love Ranch," what does that say about your marriage?


QUESTION: And this is a real-life Nevada brothel-madam, right? Isn't she?

HELEN MIRREN: Yes. Based on a true story - the story of Joe and Sally Conforte. But very loosely-based. We really - you know, the Tolstoy story is closer to the reality than our story is. Although it's very much based in what actually did happen.


QUESTION: And it was fun to play that character?

HELEN MIRREN: It was fun - you know what was really good fun, and we rarely get to do as women on film sets? It was great to be on a film set with lots of other girls. Lots of other women. And all the girls playing the girls were just so fabulous, and - and sweet, and hard-working, and committed, and great in their roles. So, that was great about that. And also, I got to work with the great Joe Pesci. who, to me, one of the great icons, legends of the film industry.


QUESTION: And the first time you've worked with your husband since White Nights.


QUESTION: Now, , when I was talking to Christopher Plummer a few weeks ago, was laughing about the fact that you were playing Prospera in The Tempest. 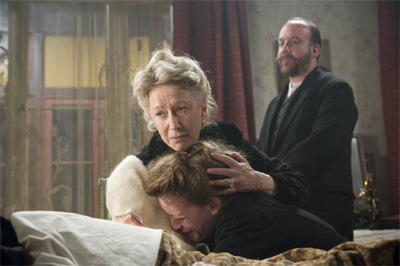 HELEN MIRREN: Yes. [LAUGHTER] Because he's about to play Prospero, I know. Isn't that great, that Chris and I have played the same role? I love it.


QUESTION: How do you do that? I

HELEN MIRREN: Well - I mean, every time you do a Shakespeare role, it's reinterpreted for the era, for the time, for the period, for your own personality. That's why you can have 20 Hamlets in a year, and never see the same one. I play it as a woman. A while ago, I was watching the play in its traditional form with the great Derek Jacoby playing Prospero. And I was watching it and loving it, and he was wonderful. I was thinking, "A woman could play this." We hardly changed a line of dialogue. The only thing you have to change is the back-story at the very beginning. And even that fits perfectly. Instead of being a Duke, she's a Duchess who's been dethroned. Thrown out. All the relationships, with Ariel, with Caliban, with Miranda, with Ferdinand - all are absolutely - you do not change a word. It changes the shift of your understanding of the relationship with Miranda, when it's a mother-daughter, as opposed to a father-daughter. Actually, I believe for the better. Because it becomes less patriarchal. The relationship with Caliban and Ariel becomes very interesting, because of the sort of undercurrent of sexuality with Caliban, and air versus earth, which is what the Caliban-Ariel relationship's about. So, it was really, really interesting. And while I was doing it, I discovered - which is probably well-known with Shakespearean scholars. But one of the most famous speeches in The Tempest is actually lifted almost word for word from a play about Medea, by Sophocles. So, it's a woman's speech. It's a speech written for a woman. Also, at that era in Shakespeare's time, witches were a much more prevalent cult, or understanding, than warlocks. You know, witches were constantly being burnt at the stake, and being - you know, Joan of Arc was thought of as being a witch. You know, they were much more - women were much more associated with the world of magic than men were. I think he only wrote it as a man, because of the accepted - you know, social conventions. Anyway, it fits very easily as a woman. It's interesting.


QUESTION: And you play who in that?

Fact and fiction converge in this talent-driven drama based on Jay Parini's novel about Leo Tolstoy. THE LAST STATION focuses on the marriage between Tolstoy (Christopher Plummer) and his wife Sofya (Helen Mirren) in its final years. James McAvoy stars as a young man who works for the couple, while Paul Giamatti plays an advisor to the writer who fights his wife over financial issues.