HARRY POTTER and the PHILOSOPHER'S STONE

Synopsis: Harry Potter (Daniel Radcliffe) has learned to live with his bullying Uncle Vernon (Richard Griffiths), his callous Aunt Petunia (Fiona Shaw) and the constant whining of his greedy, spoiled cousin Dudley. He has even learned to live with sleeping in the cupboard under the stairs.

Harry's relatives have just reluctantly learned to live with the unwelcome presence of their orphaned relation, a constant reminder of Petunia's "wayward" sister and brother-in-law and their mysterious and untimely demise.

Even the impending arrival of his 11th birthday offers no excitement for Harry because as usual, there is little chance of receiving cards, presents or any kind of birthday treat. This year, however, is different. 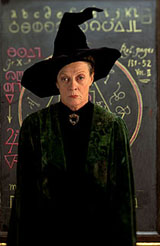 Based on the first of J.K. Rowling's popular children's novels about Harry Potter, the live action family adventure film "Harry Potter and the Philosopher's Stone" tells us the story of a boy who learns on his 11th birthday that he is the orphaned son of two powerful wizards and possesses unique magical powers of his own.

Invited to attend "Hogwarts School of Witchcraft and Wizardry", Harry embarks on the adventure of a lifetime. At Hogwarts, he finds the home and family he has never had.