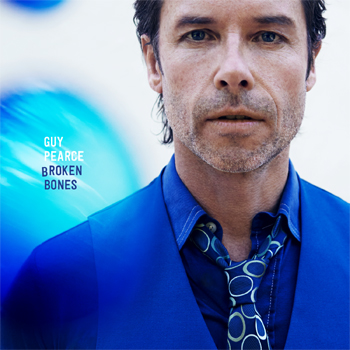 If you're surprised about Guy Pearce's musical talent, well, who can blame you. In an international movie career spanning more than 25 years, Pearce's identity as an actor of some calibre is firmly established.

But look in the fine print of his CV. Among all those interesting choices – Priscilla Queen of the Desert, LA Confidential, Memento, The Hurt Locker, The King's Speech and Mildred Pearce to name a few - you'll see a musical thread running through. Since appearing in that soap which, in its -80s zenith spawned a high-profile spate of slashies (actor/singers), Pearce attempted to suppress his own musicality. 'Every time I mentioned making music I would receive a lot of eye rolling about the number of actors out there releasing songs. And so I had a real reluctance to confront the world with what I did privately."

But despite himself, his music just kept bubbling irrepressibly to the surface.

Those who know him weren't surprised at all. The fact is, by the time Neighbours whisked him away into the professional (non-singing) acting realm, he'd been writing music for almost 10 years. Publicly, he's played with Tim Neal and The Unconscious Brothers, Rebecca Barnard and Jeff Raglas, as well as performing in a string of musical theatre productions in his younger days. Several savvy film and theatre makers took note and incorporated Pearce's tunefulness into their work. In fact in 1988 in his very first feature film – Heaven Tonight, he sang a number of songs. In 1989 he wrote and performed songs on the soundtrack of another Australian movie, Hunting then went on to play Danny Zuko in David Atkinson's production of Grease. In 1998, starring in the film A Slipping Down Life with Lily Taylor, he performed songs by Joe Henry, Ron Sexmith, Vic Chestnut and Robin Hitchcock. On it went thusly and for something completely different, in 2008, he sang 'a rather daft song" as he puts it, in the children's comedy, Bedtime Stories, in which he co-starred with Adam Sandler and Russell Brand.

Then, in 2009 he performed in the Melbourne Theatre Company's production of Poor Boy, written by Matt Cameron and Tim Finn, featuring the sublime songs of Tim Finn, which Pearce had the privilege to sing. In the band, was drummer and percussion player Michael Barker, whose stellar credits include The John Butler Trio and the legendary Split Enz (alongside Finn).

Pearce and Barker had many discussions about music and Barker expressed an interest in hearing the recordings Pearce had been making in his studio at his Melbourne home, but had kept hidden away from the world for 25 years. And there and then, things began to change.

'Michael made me realise the value in finishing songs and completing things generally. I think I'd underestimated the negative effects of working on stuff that nobody ever heard" says Pearce. 'It wasn't about finding an audience necessarily, it was that I finally saw the importance in what he was saying and I truly thought, -I really don't care what people think about the songs,' or rather, I didn't care about my reaction if I received any negative criticism. He made me recognize my fear so that I could solidify my work, get things out of my system and move on."

And so began - with the help of musical friends and cohorts - the process of producing Broken Bones, a collection of songs that bear Pearce's heart and soul with a beautiful sense of relief and optimism. Also present is the energy of reveling in collaboration after creating his music in solitude for so long. Perhaps above all that, is a captivating honesty from a somewhat enigmatic person, who's at times been an enigma even to himself.

'This whole record, to me, is about identity," says Pearce. 'And it's about the overwhelming nature of emotions. On a particular day, you can feel a certain way and so you identify yourself in that way. You might be feeling particularly positive and helpful and so you see yourself as a good person. And the next day, you might be feeling miserable and negative and you give yourself a really hard time for it. Your identity is constantly in question. And obviously, because of that other job I have, I'm often delving into other people's personalities, and that makes me question my own."

'I think the thing I'm always aware of though is that making music is the most honest way I can express myself. It allows the freedom of erratic and sometimes disconnected thoughts to be woven into the beauty and structure that I find in music. I'm aware it may not be everybody's cup of tea but as Barker says ' If they don't like it, it's not for them."

Guy Pearce - A Slipping Down Life

A Slipping Down Life is the story of the peculiar courtship of an awkward young woman and a charismatic...

For Guy Pearce, the big bucks might be with Hollywood biggies, but this is one actor whose best work is back in...

If "Time Machine" is a blockbuster, Guy happily admits that he'll be able to do more of those smaller films. He...

In a desolate and dangerous near-future, a man ruthlessly pursues the gang who stole his car through the brutal...