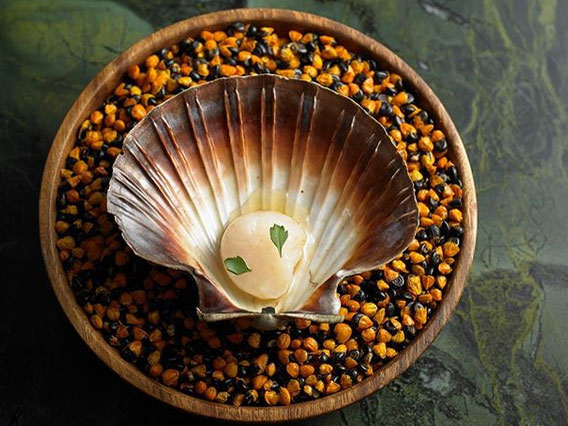 Ben Shewry's Attica (VIC) received the night's top honour of Restaurant of the Year, while former MasterChef contestant Kylie Millar took out the prestigious Josephine Pignolet Young Chef of the Year, the first time the award has drawn from chefs all over Australia.

To achieve a hat is a pinnacle of a chef's career and a restaurant's history, and the term "hatted" has become embedded in the Australian lexicon.

The 2018 edition of the Good Food Guide is the first time an all-encompassing national guide has been published.

More than 500 restaurants from Darwin, Hobart, Adelaide, Sydney, Melbourne, Perth, Brisbane and Canberra were reviewed, with 270 of these achieving hat status, ranging from one to three.

Influential Guide editors include founding editors Claude Forell in Melbourne and Leo Schofield in Sydney, along with Terry Durack, Jill Dupleix and Matthew Evans, who have charted the growth of the restaurant industry in Australia, and helped to shape it, commissioning independent, anonymous reviews from a panel of trusted restaurant critics.

"Our defining strength, and the reason people have come to rely on the Good Food Guide, is the independence of our critics. Our reviewers arrive at restaurants unannounced and pay for their own meals. We're stringent when it comes to judging, assessing service, ambience, X factor and, most importantly, the food before awarding those all-important hats," said Good Food Guide Co-Editor Myffy Rigby.

"With the Guide going national in 2018, it's been great to expand our scope to recognise restaurants, bars, cafes and chefs throughout Australia," said Good Food Guide Co-Editor Roslyn Grundy.

"Hatted restaurants deliver not only outstanding food and service but they also contribute to local economies, tourism and culture, so it's great to be shining a spotlight on top dining destinations throughout Australia," added Roslyn Grundy.

"We are thrilled to be part of the Good Food Guide Awards again this year, and in the first year of the Guide going national. The Awards are a great way to give back to restaurants and the industry that support us through serving Santa Vittoria mineral water and Vittoria Coffee. Congratulations to Ben Shewry and the Attica team on a superb effort in taking out the Vittoria Coffee Restaurant of the Year," said Rolando Schirato, Managing Director Vittoria Food & Beverage.

"Congratulations Daniel Puskas – it's no small feat in such a competitive market to achieve the Josephine Pignolet Young Chef of the Year award – and now, the coveted Citi Chef of the Year. Australians' love affair with dining continues to grow, in fact Citi cardholders alone have spent a remarkable 30 per cent more in food and wine than they did in 2016. We are proud of our support of the dining sector and thrilled to be recognising the best chef talent, that this country has to offer," said Tanya Smith, Head of Customer Franchise at Citi Australia.

Vittoria Coffee Restaurant Of The Year

Attica (Vic) took out the highest accolade of the evening – the Vittoria Coffee Restaurant of the Year.
Attica ticked every box for reviewers, capturing the current mood of the nation and exemplifying what it means to be a world-class restaurant. The Good Food Guide panel agreed that after a renovation this year, the Melbourne restaurant feels reborn. Service hums with renewed vigour, while New Zealand expat Ben Shewry's dishes boast both cohesion and a sense of place.

New Restaurant Of The Year

Citi Chef Of The Year

Chef Daniel Puskas from Sixpenny (NSW) was awarded the coveted Citi Chef of the Year award. This accolade recognised Puskas as being at the forefront of dining. It is Puskas's sheer force of will to squeeze maximum flavour from every ingredient he touches – while keeping each dish to its most minimal – that gives this former Josephine Pignolet Young Chef of the Year the edge, according to the Good Food Guide panel.

British-born Jeremy Strode, one of the country's best-loved chefs (Bistrode, CBD, the Fish Shop), was posthumously chosen by Les Schirato of Vittoria Coffee for the Legend Award. Strode's cooking style, legendary kindness, willingness to share knowledge and outstanding long-term contribution to the industry over 27 years cooking in Australia were key factors supporting his legendary status. Currently working in the pastry and sauce section in the three-hatted Attica, Millar was the only woman this year to make it through to the final round of interviews for this award.

Nikki Friedli (Africola, SA) was awarded the top service gong, for executing the highest standard of restaurant service, from attitude and skill to knowledge and personality. The 26-year-old restaurant manager is renowned for reading an audience – from slinging mescal shots to party-keen locals to introducing first-time diners to the bold flavours of South Africa at the Adelaide restaurant.

The Orana Foundation (SA) – winner of the Food for Good award – is celebrated for its innovation, charity and sustainability, and for going above and beyond to contribute to the broader community. Restaurant Orana chef Jock Zonfrillo expanded the discoveries of his Adelaide venue into a foundation that preserves the food heritage of Aboriginal and Torres Strait Islanders and integrates native foods into the broader culinary culture. Most importantly, Zonfrillo strives to ensure any benefits of a new native produce industry are returned to Indigenous communities.

Bar Of The Year

Arlechin (VIC) was awarded Bar of the Year for nailing service, drinks, vibe and decor. With a comprehensive Italian-ish menu, the Grossi family's new late-night Melbourne bar also serves up cocktails designed by Romeo Lane's Joe Jones (last year's Age GFG Bar of the Year) for a sophisticated knees-up every night until 3am.

Sommelier Of The Year

Spanish-born Raul Moreno Yague from Osteria Ilaria is the 2018 Sommelier of the Year – demonstrating an in-depth knowledge of wine, while helping to influence and educate diners. Moreno Yague boasts cooking experience in Marco Pierre White's Mirabelle kitchen, a Masters in Viticulture and a stage at Thomas Keller's Bouchon at the Venetian Hotel in Las Vegas.

Aria Brisbane (QLD) was recognised for having the Wine List of the Year – a diverse and high-quality by-the-glass selection alongside an accessible bottle list that displays a good range of vintages and complements Aria's food and style. The 1000-wine strong list at Matt Moran's Brisbane riverside fine diner may look daunting at first, but sommelier Ian Trinkle has designed it so fluidly that even the most casual wine drinker can drill down to a drink selection within seconds.

The Summertown Aristologist's (SA) wine list was honoured for complementing the restaurant's food and style, while also reflecting the unique qualities of the region courtesy of winemakers and venue co-owners Jasper Button (Commune of Buttons) and Anton van Klopper, along with Aaron Fenwick.

The Good Food Guide 2018 will retail nationally in newsagencies and online at www.thestore.com.au/goodfood for $29.99.